Sometime in the last day or so, the Community-created revisions that add the "Possible Duplicate" box to posts closed as duplicates started showing up on the post itself as edits by the owner. For example, on the post Sign on separate line in vote count for low-score mod nominations 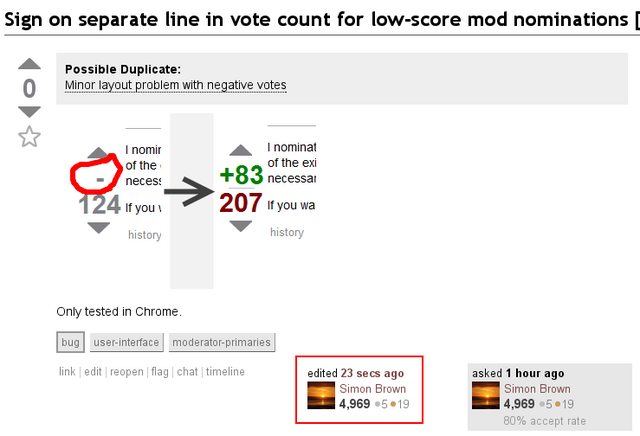 The edit by Simon Brown was actually by Community, and shows up correctly in the revision history. The same thing happened on this post 5 hours ago, and this SO post 2 hours ago. These two SO posts that both closed yesterday are correct (they show no revision on the main page, and Community in the history)

The cause of this was fixed long ago (to be precise: on the same day you reported this). It was a side effect of a change that had the purpose to support the (then-new) suggested edits, but which had several undesired effects (also including the closing of a question to bump a post).

So this issue is (at most) only visible on questions that were closed as dupes on that day. In addition, the fix for When the last editor is deleted, the gravatar of the post owner is shown instead also affects this very case; after that's deployed, there won't be a double-signature anymore on those post; instead, the "anonymous avatar" will be shown as the editor, without a display name.

Granted, that's not 100% correct, but since it only affects very few posts (namely those that were closed as dupes on the day this bug was active, and have not been edited since) and isn't a real problem, I don't think it's worth doing some historical data fixup for this.

Not the answer you're looking for? Browse other questions tagged bug status-completed closed-questions duplicate-questions community-user .

17
When the last editor is deleted, the gravatar of the post owner is shown instead
5
Why is the Community user accepting answers?

61
“Duplicate of…[deleted post]”
136
Allow moderators to hide a revision
7
Last-activity link from main is wrong for Community edits
11
When are tag wikis created by the Community user vs a normal user?