Have a look at this sample:

The small l looks like a 1 in other fonts, while not like the 1 in this same font. Some fonts, for example the one used in the textfield where I put the title, use another l, rounded at the bottom, so the l doesn't look like an 1, and the 1 not like an l. However, I got confused studying another post, because there was no 1 to compare the l to.

But maybe it is a browser/OS/installed-fonts - problem, so I use firefox on xubuntu 9.04 and don't know, how to determine which font is actually used by my browser. Perhaps you may verify the one-ness of the l, but I can take a screenshot too, if you like.

By the way, the normal text-font displays small l like capital I. (l like in small, I as In Inconvenient) :)

After receiving the first 4 answers, I like to summarize the findings and my investigations:

The html-code uses a simple code-tag. The layout is driven by css, which is, according to a testside, defective over and over, but afaik not in relation to this question, see: http://jigsaw.w3.org/css-validator/validator?profile=css21&warning=0&uri=http%3A%2F%2Fmeta.stackoverflow.com%2Fquestions%2F76837%2Fcode-font-doesnt-distinguish-1-and-l

Here is a screenshot of diffrent mono-fonts: 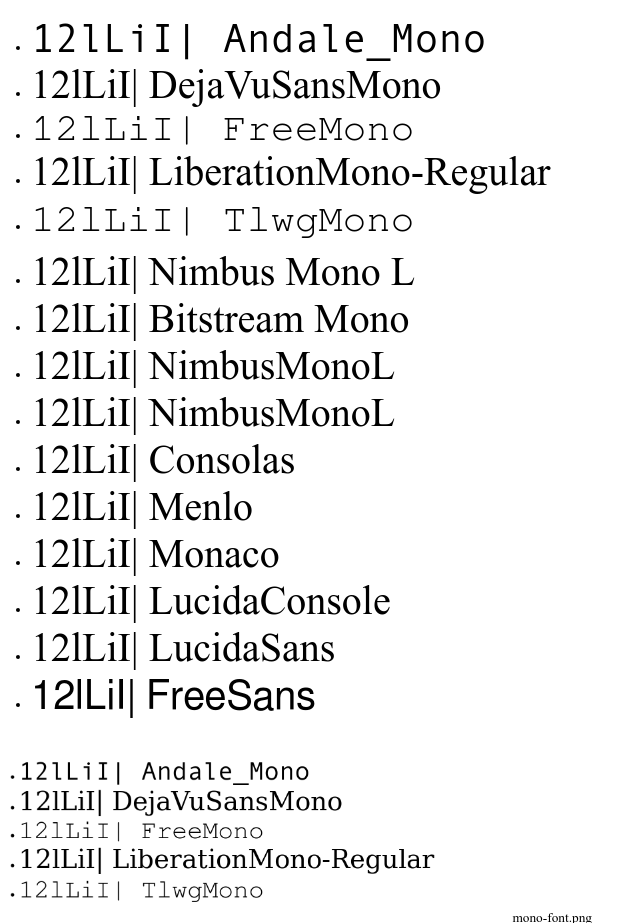 On my system, the only font which would make a difference, is ms-ttcorefont/Andale_Mono, but even if it is used as default-monofont, Liberation and DejaVu are prior in the List, so they are found and used.

I tried, as a dirty hack, to create a symbolic link from Mono_Andele.ttf to Consolas.ttf, but it doesn't change the font. Maybe I need to restart firefox for the change to take effekt? Maybe font-substitution isn't that easy? :)

I suggest you post a message on Super User asking for help installing a better fixed width font on Ubuntu, and configuring Firefox to use it.

Looks distinguishable to me.

The following all showed a distinct l and 1. In all the 1 has a downward slash at the top, where the l is straight. In all but the IE 6 machine (a clean XP install, probably lacks cleartype) the 1 also appeared bolder (thicker lines).

Based on the Mac OS testing I think this may be caused by the known linux-fonts-and-font-rendering-suck bug.

Not the answer you're looking for? Browse other questions tagged feature-request fonts .

3
Not enforcing fixed width font family
332
Distinguish close votes by reason
14
Fonts and the new Q&A theming
153
We are switching to system fonts on May 10, 2021