I posted an answer on english.SE in which I wanted to type an 'n' with a dot below. Using the actual character

looked ugly in the serif-font used there. It seemed (in preview) to be displaying that character in a different font, probably because the default font didn't have this character.

so I instead used, after n, the character

This appeared fine in preview (same font as the rest of the text). But when I hit Post, the character in the answer had changed into the pre-composed 'n with dot below' (U+1E47), which was ugly.

Why this transformation? Implementing this current behaviour seems it would take more effort than leaving the characters as they were, so I'm not even sure whether this is a StackExchange-specific bug or part of some Unicode implementation. Anyway, why does this change happen?

Edit: Browser: Google Chrome 8.0.552.237 on Mac OS X 10.6.6. The possibility just occurred to me that Chrome may be submitting 'ṇ' when I type 'ṇ', in which case it wouldn't be a StackExchange-specific bug, but I'd like to hear from someone who knows the issue better. (I can't thoroughly test it myself on any Stack Exchange site without bumping up posts. :p)

Edit2: It's repeatably happened in this post itself, where in the first "test word" for using the combining character I type the two-character version (n followed by U+0323) but after posting it turns into the former (the character U+1E47). The second 'test word', which I type using the HTML entity, is not affected.

Edit3: In the default font used for meta.SO (Arial), the two forms look alike. Please try a font like Georgia (the default on english.SE) to see the difference. The link to the original post is here, in case it helps.

It seems that the browser or the backend (stackoverflow) that receives the data performs Unicode NFC Normalization because from Unicode point of view the two are equivalent and it is general recommendation to Normalize all input when dealing with Unicode.

Wireshark for Chrome on a Mac shows that the n followed by U+0323 is sent as %E1%B9%87, which are the percent-encoded hexadecimal values for a UTF-8 encoded U+1E47.

So it's indeed Chrome that's doing this.

(And it seemed to me that Chrome was doing some double encoding, but apparently this is expected for the application/x-www-form-urlencoded form data that Chrome sends.)

Next, Mac OS X renders the character using Times, not using Georgia. To see which font is used, simply paste the sentence into Text Edit, and select the specific character: 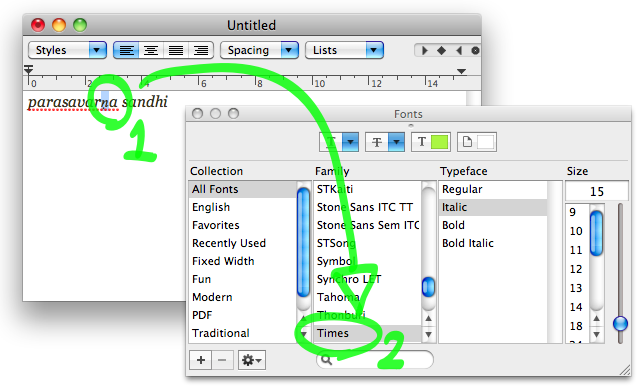 Chrome uses Times because that is listed as the second fallback in the CSS:

(Apparently Times New Roman does not include the character either.) Changing that CSS to read:

...will make Chrome (and Text Edit) use Arial for that ṇ. On the revisions page, you can test by right-clicking the text, selecting "Inspect Element", then find the font-family thing in the right pane, and double click it to add Arial:

(So, if you have some font that looks like Georgia, but does include the special characters, then you could create some user script to change the CSS for that site.)

Not the answer you're looking for? Browse other questions tagged support unicode .