Is it legal for Stack Overflow to redistribute OpenSTV binaries?

Here are the facts: Stack Exchange elections results are calculated using OpenSTV. OpenSTV is, as of December 4th 2010, open source, but not free. Stack Exchange sites provide the binaries of OpenSTV for users with reputation above a certain amount (150 according to Geoff). Geoff suggest that because SOIS has donated a significant amount of money to OpenSTV that it is allowed to do this.

And here are my questions:

Yes, it is perfectly legal. You can not add restrictions beyond the GPL when using the GPL. That is to say, you can't stop people from exercising the freedoms that the GPL provides to end users.

That being said, the GPL 'kicks in' for anyone who conveys a covered work. Yes, Stack Exchange is required to provide anyone who asks a copy of the source code. There is no ambiguity there. But, it becomes a moot point when dealing with interpreted languages.

OpenSTV can ask that people pay $5 and download the software from OpenSTV, which they're doing. However, that practice does not make the software any less free than it is (referring to liberty, not price), anyone is free to distribute under the terms of the GPL.

Stack Overflow's donation covers every $5 per download, and then some, thus respecting the wishes of the authors. That was the right thing to do (IMHO), but it wasn't a legal requirement.

It looks like OpenSTV changed to a more restrictive license sometime after 1.7 (which is the version we're discussing). This doesn't change the fact that version 1.7 is free software, as defined by version 2 of the GNU General Public License.

Yes, this is all done with the approval of Jeffrey O'Neill.

You may email him yourself to ask, if you like. Or just visit http://www.openstv.org/ and look in the right hand sidebar.. 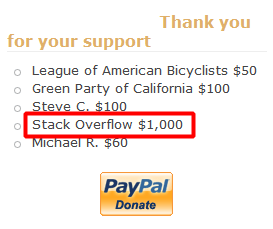 (just FYI, the download is only available to users who have the reputation necessary to participate in the election.)

The downloads page itself, which you link to, says the downloads are under the GPL. By definition, that means StackExchange and everyone else has the right to redistribute it within the terms of the GPL. What exactly confuses you?

Linux users can get OpenSTV from their distributor. For example, Debian and Ubuntu have an openstv package. That is the usual path to getting binaries.

Not the answer you're looking for? Browse other questions tagged support election legal .