Is there a way to have links in source code without losing syntax highlighting?

I quite frequently would like to have parts of code work as links (e.g. uncommon methods linking to relevant documentation). Achieving that is possible with HTML <pre> and explicit <a> tags; however, the syntax highlighting doesn't seem to work on these manual <pre> blocks. Is there a way to have both?

If you're really up to it, you can enclose a <code> tag inside the <pre> tag. We don't have syntax highlighting here on Meta, so you can't see it, though.

I caution against this, even though it works. Most people probably will not expect hyperlinks to be inside code blocks because most programs don't include functional hyperlinks in their bodies, so it will not be as intuitive to readers as including the hyperlink before or after your code not unlike what you did here.

For a demonstration of how it looks on Stack Overflow, here's an image. Notice how the hyperlink has the same color as a standard formatting for both the number and the type. It's not at all visible that it is a hyperlink. I did test this on an actual post, and the rendering is the same as the preview. But I probably should've done it as an edit suggestion, since that would've been properly rejected. Ah well. 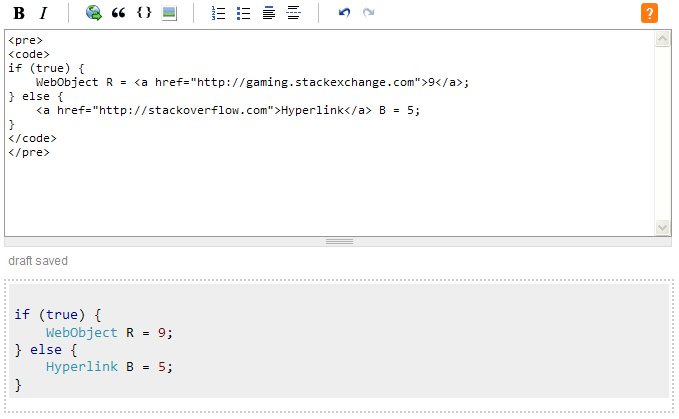 Not the answer you're looking for? Browse other questions tagged support hyperlinks syntax-highlighting .