No longer any community in Area 51 proposals

Previously we had the comments where it was easy to tell who was still watching a proposal regularly because minor questions asked by new followers were answered by this handful of people.

This small collective I would suggest is very important when setting the site up after going to beta and is more than likely going to be the most active in the closed beta stage and for defining the site.

Now IMO new people who are new to the SE sites and area 51 are not likely to post a "discussion" question as opposed to posting a comment and are even likely to post the wrong type of discussion question.

Furthermore this small group of important members has no public way to stay active. Basically there is no longer any activity and no longer any need for these people to regularly watch the proposal. If it takes 6 - 12 months to get the proposal through the definition phase these people will have done nothing during that phase and may lose interest.

There is this request marked status-planned for adding comments to commitment phase which I guess is no longer going ahead.

Is it important to start building community around sites early and should we have the tools to facilitate open discussion on proposals?

I'd argue that the discussions are a step up from the comments. They're easier to follow because multiple trains of thought are interspersed. They're first-class citizens in the network, with voting, comments, answers, etc.

I'd also argue that they don't encourage you to stay active. I don't see how this stops people from regularly watching a proposal and pushing it along.

These are available during the commitment phase as well. 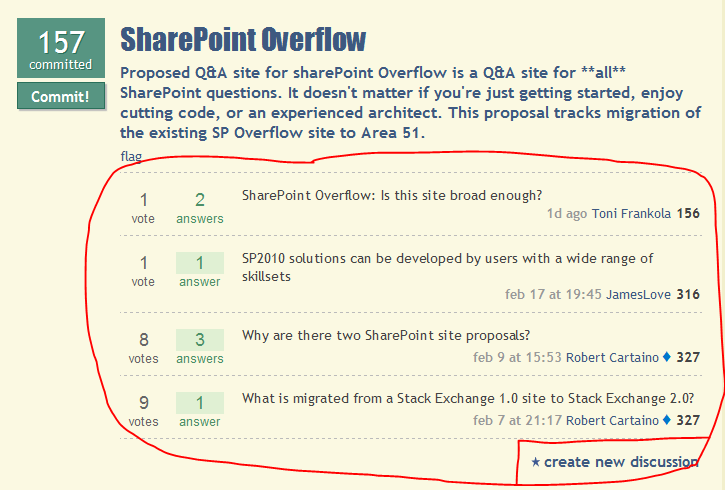 6
Do proposals on Area 51 expire?
76
What can be done with Area 51?
409
Graduation, site closure, and a clearer outlook on the health of SE sites
2788
A Terms of Service update restricting companies that scrape your profile information without your permission
494
Congratulations to our 29 oldest beta sites - They're now no longer beta!
2502
Firing mods and forced relicensing: is Stack Exchange still interested in cooperating with the community?
981
Firing Community Managers: Stack Exchange is not interested in cooperating with the community, is it?
551
The company’s commitment to rebuilding the relationship with you, our community
725
Stack Exchange Public Q&A access will not be restricted in Russia