NOTE: This is purely an idea I had and in no way represents an intended feature we're going to add. I'm posting it to see if it could be shaped into something useful, get feedback, etc. I haven't even asked the rest of the company what they think yet, because I'm not even sure this idea would work.

One of our core values is that anything we do to make money as a business has to benefit the community as well. This is the entire reason we put so much work into Careers 2.0.

I was thinking yesterday about how Careers can let you leverage the reputation you've built at SO into something tangible (hopefully an awesome job), but this doesn't help all the people who already have jobs they love. One of the companies we work with was lamenting the fact that there's no easy way for them to show off the fact that they have some really high rep, smart SO users on staff and that they are very proud of this. It could actually help them recruit people. And it would be valuable for the people who work there to shine some of their awesomenessTM on their company (if they wanted to). They could probably do it in an ad-hoc way but maybe we could assist.

I rolled up a bunch of my ideas into this mockup: 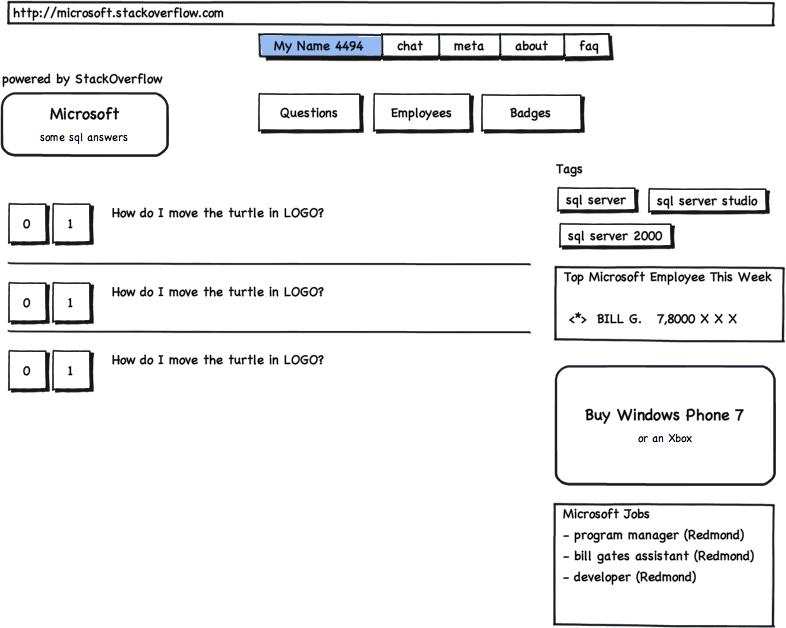 This gives employers a virtual place on Stack Overflow that they can point people to. You could go there and interact with Stack Overflow in exactly the same way you do now (except the tag set is restricted).

Is this appealing to employers?

Yes, as someone who guides marketing and hiring dollars, I like the idea. We don't have a very large developer base (well, we might if you count the contract folks) but all of us are regular Stack Overflow users.

Is there anything we could add to make it more appealing?

Yes, access to analytics for the company landing page.

Is this appealing to happily employeed SO users who like their employers? Is there anything we could add to make it more appealing?

I'm kind of fond of the idea, but there's also the 'what I say / do on Stack Overflow is an action that me, not my employer takes'. However it is implemented, I think it's important to not blur that line.

Is this a good idea? If not, is there anything I could change to make it better?

I think you're on to something, because this (could) be a kill two birds with one stone proposition. Recruitment + marketing/brand building + analytics all in one place is extremely appealing.

BTW - To move the turtle in MS LOGO, you have to use edlin.

Maybe I'm reading too much into this, but I'd be slightly worried about the peer pressure this would put on the employee to accept having his account associated with his employer.

(And shouldn't the employer be paying him for using his rep too?)

I think it's an interesting idea. Here's what I'd do:

Remove the 'questions' section of the mockup. It really doesn't fit in with the 'company page' idea. What are they questions for? What the company's users have posted? Those can go on the user's stat's page. Not every company makes a product that developers use, so it's not a good idea to tie tags or answers to a company.

Users? Great thing to tie to a company. It increases a company's visibility to developers, letting them know it's a good place to check out.

I see the company page as more like a Tag wiki; with Jobs and SO users that have that information in a hidden (and possibily visible if they want it to be) Employer field.

Jeff doesn't like this idea, but what I don't think he sees is that it enables developers to see what the good companies are out there, and that's important for us. The fact that it promotes a company is ancillary. It's a Joel Test by-example. What could be better than that?

That company has a spectacular lack of imagination, since all they need to do to promote their company is have their Stack Overflow users link to their employer in the "about me" field.

How many people here don't know that Jon Skeet works for Google? Or that Eric Lippert works for Microsoft? I'd say off hand I know who employs a solid chunk of our notable users for one simple reason: it's listed in their profile.

They're awesome, so their employers become awesome by proxy. Reversing this does not work, and is completely counter to the philosophy of the site.

Is this a good idea? If not, is there anything I could change to make it better?

The only way this idea works is if you shift it away from employers. That doesn't match our model at all; we're not a support forum for Microsoft, or Splunk, or Netscape, or whomever. Instead, switch it to focus more generally to topic / tag groups. See Pekka's comment.

I am probably somewhat of an anomaly on StackOverflow. I am a developer, and an early, avid user of the site with 25k rep. I also am responsible for marketing for a software tools company that advertises on StackOverflow.

I would very much like to engage with the StackOverflow community as my employer more directly. I would like to do that in a way that is beneficial to the community, and I don't think that ads are the best way to do that.

I don't want to do anything that isn't beneficial to the community. I think there are things that would be (even if I am unsure of what that would be).

Starting from the point that http://company.stackoverflow.com exists, what would you want want to be there?

I don't think the page should focus on what company-X's employees have done on SO, but rather what the community as a whole has done with their products.

Besides, just because you're an employee doesn't mean you're the best person to answer question. So the companies might prefer highlighting their highest rep user, rather than one of their own. Off course, if your employee happens to be a SO-rock star, then you should be highlighting him, but at least you get a bigger pool to fish from.

Making it revolve around products, also allows the concept to more easily spread to other SE-sites. Especially broad sites, like the original Trilogy, would benefit if certain tags got the same attention and love as Ask Ubuntu or Apple.SE get (from the company or community). Perhaps it would also counter some of the fragmentalism we're currently seeing on Area51.

I've mentioned it to Jeff before, that I wished companies could brand their tag pages/wiki, naturally this idea takes that even a step further and would let companies have their own landing page. But perhaps letting companies choose tag sets, allows for more flexibility and some overlap (not every tag is exclusive to one company).

And I like the idea of allowing companies to brand their landing page, because I hope some companies would start to use our sites as their semi-official Q&A channel. Currently, showing affiliation with a given company is somewhat frowned upon (SPAM!!!), so why would anyone even dare mention their affiliation when answering? But I would expect a Microsoft employee or MVP to answer a Windows question on superuser.com/microsoft.

Therefore I think companies should have the opportunity to have their employees answer questions with a distinctive branding.

That way they will also feel more in control over the answers, off course it will still be up to the community to vote whether or not the answers were useful or not.

Off course, most companies shy away from 'outsourcing' Q&A, but they forget that a lot of the problems their users/customers have is their product interacting with other products. These are subjects are impossible to anticipate and are most of the time based on customer complaints. By using our sites, they can crowd source their Q&A and if necessary answer it themselves.

And because we provide the data dumps + API, they can easily retrieve all the relevant questions and republish them on their site (with attribution), so they don't have to fear that when we disappear their content will be gone.

So yes, I think it would be appealing to employers, but they would need the chance to provide branded answers. And by showing that you're employed by the company, other users will hopefully trust your answers on that topic more, because you might have access to inside information. By wearing a company badge, users should also feel more freely about answering questions during working hours.

Is this appealing to happily employed SO users who like their employers?

I'm a happily employed SO user who likes my employers and... I'm not sure. For me:

To add to that, my company:

Don't get me wrong, I like the idea, but I think this belongs as an opt-in part of careers.so. I'd propose the creation of:

profiles, where careers users who wish to opt-in on SO can. That way when a company contacts a user, or posts an advert, the user receiving this can check the company page and view the users who have opted in there.

You might also consider offering the ability for users to count their reputation towards the company without appearing on the company page. So you might show a total reputation/badges per company and number of users on SE as an additional way to "show off".

Not the answer you're looking for? Browse other questions tagged discussion feedback .

14
What is the view on accounts shared by multiple users on Stack Overflow?
45
Introduce sub-communities (or “Portals”) to prevent fragmentation

901
Why aren't people voting for questions?
1440
Fastest Gun in the West Problem
2777
A Terms of Service update restricting companies that scrape your profile information without your permission
826
Net Neutrality and Stack Overflow / Stack Exchange
2426
Firing mods and forced relicensing: is Stack Exchange still interested in cooperating with the community?
2092
Stack Overflow is doing me ongoing harm; it's time to fix it!
568
Change in roles for Jon Ericson (leaving SE)
578
We're switching to CommonMark