I would like to be able to learn from my flagging "mistakes", and adapt my personal flagging thresholds. To do this, I need some idea of which items that I flagged added to or subtracted from my flag weight.

I'm suggesting some sort of a flag weight "audit", similar to the rep audit (stackoverflow.com/reputation).

A new feature has been deployed that lets you click your flag weight to be brought to a summary of your flag history. If your flag weight is not visible (on account of sitting at 100), you can also access this by going to <siteurl>/users/flag-weight/<userid>, substituting for the site in question and your own user ID.

It shows both moderator attention flags (with the message you provided) and spam/offensive flags. It also provides a link to the post and a description of any moderator actions that were taken post-flagging. If the post is deleted, the link will be highlighted. This is visible even if you are sub-10k, but naturally you cannot properly follow the link. Below is an example entry from my own flag history:

It's not an audit of what the dismissal resolution is, but for the points made in my main answer, I don't believe that is much more necessary or will provide true additional benefit. This system will provide information on what actually happened to the flagged post, which you can compare to what reason you gave to determine more accurately whether your flagging behavior was truly off-mark or not.

Honestly speaking? A "flag weight audit" strikes me about as useful to learning from your mistakes as never getting comments on your downvotes would help.

Before I explain my analogy to downvotes, let us first preface this with the issue that flags stick around on deleted posts. For users with less than 10k, they wouldn't be able to see what the flag they made necessarily was, especially if there were multiple problem posts in one question. This makes the audit trail a bit more difficult to follow for some users. There are ways to work around this, but it's still something to be mindful of. Onto the analogy.

Under the current system (as well as how things always were before the flag weight was visible!), you're blind until a moderator contacts you to explain that you've been making a bunch of flagging blunders and should stop. If we had an audit system, then it would tell you the simple essence of "This is what you flagged" and "This is what happened to the flag". It's a bit of light but you still probably need to stumble a lot to get any good learning.

When it comes to dismissed flags, this is the same as getting a downvote with no explanation. A downvoted post tells you in a general sense "Oh, there's probably something wrong in some fashion", but you get no guidance. If you're lucky and insightful, or if the flaw is glaring, you might be able to divine what the downvote was for, and learn. But often a reasonable post gets a downvote and you're simply stumped for what the flaw is after a thorough analysis. It ends up pointless to dwell on it until an explanation is received, and thus nothing is really learned.

Dismissed flags operate the same way. On some clear-cut cases, it will be clear what the dismissal was for. The visible context isn't always enough to explain why a flag gets invalidated, though. Sometimes, you will even get flags dismissed as invalid when you're flagging similar content for similar reasons as your valid flags, because of special circumstances for the particular instance. And there's also the valid point that incorrect flags can still get dismissed as valid because they still led to an entirely different action being taken. Speaking from experience, most invalid dismissals on Gaming that I deal with are less bad flagging practices and more just minor missteps.

The strict values of dismissal don't really give a lot of information as to the reason behind why your flags may have been inappropriate or otherwise improper. If you're interested in learning from your flagging mistakes, the why of it being a mistake is fairly important, and a simple play-by-play audit isn't going to provide that information.

Now, the dismissed flag count can be seen. 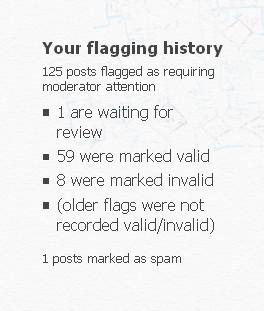 34
How to read the flagging summary?
783
Recent feature changes to Stack Exchange
89
Should I vote to close a duplicate question, even though it's much newer, and has more up to date answers?
110
What happened to flag weight?
36
How should we handle flag weight for invalid flags?
10
Flag-weight summary does not say if my flag was correct or wrong
11
Please show what flags were deemed good or bad
14
Permanent Flag Weight History Link on User Profile
3
Can a flag that attracts moderator action be treated as invalid?
3
Do Dismissed flags cost same amount as before the 500 mark?
See more linked questions