Can the StackExchange™ MultiCollider SuperDropdown™ default to “inbox” rather than “hot questions”? [closed]

Ask Question
Asked 8 years, 9 months ago
Active 7 years, 10 months ago
Viewed 663 times
61
Closed. This question is off-topic. It is not currently accepting answers. 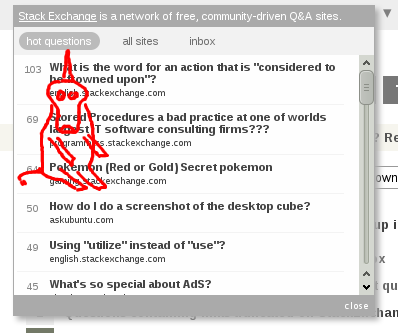 But when I click on the button, I just want to see my recent notifications and happy dancing unicorns: 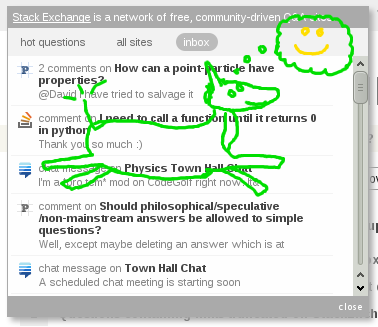 Maybe I'm strange but I would think that most people use the dropdown box in the same way. So could the "inbox" page be the default? I'd imagine this should be an easy change to make.

As a nice side effect, this would help with the issue some people have brought up (though I can't find the questions now) where new notifications don't remain highlighted after the box goes away, even if you haven't clicked on them. It doesn't fix the issue the way some people would want it fixed, but it does cut down by one the number of clicks you need to look at a notification you haven't seen yet. And when you're trying to catch up on several new notifications, that one click adds up.

Once upon a time, I would have agreed with you. I was not interested in seeing the hot question, so that was one unnecessary click. It annoyed me too.

Now, I view it as a feature that takes advantage of the traffic on the Stack Exchange Network to help new sites to grow. When one of Skeptics' questions show up in the StackExchange™ MultiCollider SuperDropdown™, it gives our site a lot more visibility and brings us a few new users each time. I am sure that heavy users of other sites will feel the same.

How many people want the hot questions tab and how many people just want to see their inbox? I'm sure Jeff & co. can check that out. Does it really help traffic to the less popular sites? Is this something that a lot of people use? If they do, keep things as they are; otherwise, why not make life a tiny bit easier for the rest of us?

Having to choose the inbox every time you forget to open all messages in one go or simply want to find an older message can get really annoying after a while. Also, the default behavior is a bit jarring: if you have a message, it's going to default to the inbox; if not, you're presented with a list of questions that you might know nothing about. It's not really consistent behavior.

I agree with David Zaslavsky and would like Inbox to be the first tab. Besides the apparent argument that a user wants to have quick and fast access to the questions he is participating or asking himself (why make his life difficult? it's just ABC user experience) I find the "hot questions" functionality itself not so interesting. Why? Because Tags are the main drive behind the navigation of the website, not popularity. This is because usually an individual will be specialized in a series of technologies that he favorites in his right column and checks those out. He doesn't care if a question is "hot" (by the way hot is not so representative, not 'evident' enough.) if it concerns for example .NET while he's a jQuery ninja. I also agree with alex that there is no consistency: I spent quit some time trying to figure out where are my notifications when I realized that sometimes the system defaults to inbox, others on the hot questions. At least make those Tabs more apparent!

The intended usage of the the SE™MCSD™ is, as others have noted, to bring traffic to other sites. Me being a bored guy, I look through it often and open anything that's imteresting. Yes, I'm probably the only one who does that ;)

As I mentioned to you before, a rather crappy TeX question of mine once made it up there. I've seem that a lot of the MC™ suggestions are crap as well, from a global POV. From a global POV, most of these ought to be closed as 'too localised' ;) Heck, I've seen a debug-please question reach there.

This tells me that these sites already have enough traffic. By that, I mean that they have a stable and active community--so active that even the bad questions get lots of attention.

On the other hand, sites like Physics, which have a sleepy community rarely(if ever) reach the multicollider. I've never seen cooking/gamedev/android/stats/theoreticalCS/etc there either--forget beta sites. These places have awesome questions, which may also be interesting to a nonspecialis--but not enough activity to push any question to the 'hot' list.

This makes me feel that the 'hot questions' dropdown no longer carries out its intended purpose. It introduces users to sites they already kmew about--while keeping smaller sites in the dark. For example, how many of you knew that Physics.SE even existed?

To amend this, I propose a normalised hot question metric. I'm not sure of the nitty-gritties, but it must take site activity into account. Yes, the global relevancy issue is still there. Maybe there could be a 'block questions from this site' link next to each question. That way, a user who doesn't know German need not be perstered with questions from German.SE.

We could also have the ability to default to the inbox, but then everyone will do it and sleepy sites will get no new traffic via the MC™ at all. Of course, it would be reasonably easy to script :)

I think this suggestion is very useful, but it won't be implemented.

Simply because the 'hot questions' tab has the purpose of distracting you from your work to wander off to interesting questions and thus spend more time on the site. If the inbox was the default, then a lot less people would get distracted, you would actually get your work done or check out the answer you're looking for and this would result in less traffic for stack exchange.

So this is a case of users vs site admins. As always, traffic == $$$, so if you're getting distracted, that is only a problem for you, not for stack exchange.

Not the answer you're looking for? Browse other questions tagged feature-request global-inbox stack-exchange-button .

58
StackExchange™ MultiCollider SuperDropdown™ header thingy usability question
14
Why does the global inbox notify me again of messages I've already viewed in the inbox?
376
Add an “I don't understand” option for review audits
127
Feedback request: New top bar and MultiCollider redesign
489
How to avoid “Hot Network Questions” on the sidebar