Inbox functionality has something left to be desired

The inbox hasn't been very nice to me.

Often I will see a red number at the top left of the page, indicating that I have some new alerts in my inbox. It is a useful feature and I would definitely make an "Eeeek!" post if it were gone, but there are quite a few things about it that confuse me.

Here is an example of one that I had today: 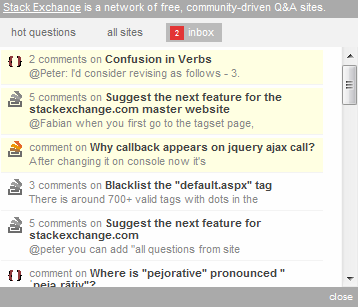 The first thing that confuses me is that the number 2 indicates that there are two new items in my inbox--but three items are highlighted. This annoys me because I automatically start at the bottom higlighted item and work my way up, in chronological order of the alerts, much like I do with my e-mail. The problem is that the bottom highlighted items are not new, and it leads me to something I have already seen. That often makes me look through a few extra alerts and is very annoying.

So my first feature request is, please make the highlighted items correspond to the new items. As an aside, what does it currently even mean when an item is highlighted? I haven't been able to figure that out yet.

Another thing that confusing thing: earlier today, I saw the red number 4, and the new item in the inbox was "5 comments on Suggest the next feature". I looked at the comment thread, and there were only four comments that I had not seen before. Why does it say 5 comments when there are only four new comments?

At first, I assumed it meant that there were 5 total comments. But there were 13 comments. It would make much more sense to make the comment number on the alert correspond to the number of new comments. As it is now, I am still puzzled as to what it even means by "5 comments".

Last item: as I said earlier, I treat my inbox much like my e-mail inbox, and think of the highlighted items as "unread", and the others as "read". However, when I go to read one of the new items, everything gets marked as read. That makes some of the new items that I haven't seen yet marked as read, and I have to think for a little bit to figure out which ones are new and which ones aren't. So my last request is to not mark anything as read until I have read it.

It is surprising that such a commonly used feature as the global inbox has such confusing behaviors that have been around for so long. To me, all of these seem to be common sense in consideration of the usability principle, don't make me think.

If you disagree, and think the the behavior as it is now is acceptable, please tell me why. I am very curious about the reasoning behind the current behavior.

Highlighting was based on last view time, everything new since you last looked at your inbox would be highlighted.

While strictly less correct, simply highlighting the N most recent (where N = the little read number) is more understandable; this change in behavior has been deployed. Note that highlighting choices occur before comments and answers are grouped, so you may have fewer highlighted rows displayed if multiple new items are on the same post.

Of course, the natural race condition of "an item came in between the # being rendered (at page load) and the inbox being shown (ajax'd in)" remains, and is effectively unsolvable.

Alot of what you're complaining about deals with grouping comments and answers based on the post they're on.

We did try the inbox without this grouping logic, and its much harder to use. You tend to get one question with loads of comments making it impossible to see activity on other posts.

So my last request is to not mark anything as read until I have read it.

No, this is a terrible idea.

The inbox gives you a shortcut to recent activity you may care about. Plenty of times you don't, especially if you've worked up a big backlog of posts.

By forcing users (with an OCD baiting red number) to actively look at everything that comes into the inbox, we'd be wasting tons of peoples' time.

Not the answer you're looking for? Browse other questions tagged feature-request bug status-bydesign global-inbox responses .

40
Can we get an option to stop the global inbox from marking everything as read?

955
Show all of my question/answers to me even if they are deleted
148
Adding Favorites to the Stack Exchange global inbox
6
StackExchange Inbox always shows recurring chat event as “happening soon”
384
Send authors an inbox message if their question is closed
191
Let users with sufficient reputation use “problem” in titles
127
Feedback request: New top bar and MultiCollider redesign
11
E-mail subscription titles and content should use proper pluralisation
45
What events trigger an inbox notification?