Why allow user accounts to be related, but unassociated?

Currently, if your accounts are associated there's a button to let you disassociate them. 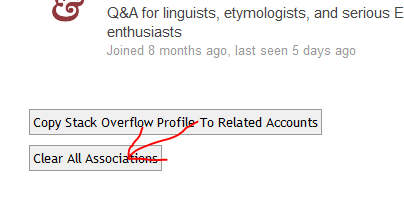 I really think we ought to kill this feature. Its pretty worthless as is and adds a lot of (error causing) complexity to account management.

But first, some numbers since we all love data.

This is not a terribly popular feature.

And what's the point? To hide your behavior on other sites*?

There is a lot of complexity making this possible at all, and it would be much simpler** to just treat "related accounts" as associated without an explicit association step. It would also eliminate some recurring issues.

To be clear, I'm not suggesting a policy of "if you have accounts on two sites, they must be associated." Just that if you signup with the same OpenId on two sites, they would be; you would remain free to use distinct identifiers and retain distinct accounts.

So, are there any good reasons for the disassociate button to remain around? Or is it finally time to kill it?

*Protip, doesn't work since moderators can see some of your "related accounts."

**On further reflection, it'd actually be simpler to just always do a lookup by identifiers; so disassociation would remain possible by changing ids, but your accounts would need to actually be disjoint in terms of identifiers.

I am one of those 206. I don't want public links between different sites in SE.

Drawing a line between personal and professional is a strong reason to do this - especially as SE expands. For example, someone might not want a coworker to see that their SO account is linked to radical-political-and-religions-views.stackexchange.com.

My reasons for staying disassociated are my own, so I'll just say that I feel very strongly about this, and would sooner delete accounts than have them linked.

Well, first off, mario is right - the current UI is crap. It took me a while to figure it out, and even then only with considerable help. It makes sense, once you know how it works... But digging up that information isn't trivial. So yeah, if < 10% of the users who've tried have managed to keep their accounts disassociated, it's hardly surprising.

Beyond that... Do we really need it? I don't really care if my SO account is associated with my Cooking account. If I was especially concerned about privacy, I'd avoid specifying personal details on either account.

That said, as the SE network expands, there'll almost certainly be sites launched that... Users regret signing up for. Maybe just cold feet, or maybe because the definition finally hashed out during beta didn't line up with what they had hoped for. Sure, committing to Public Media might seem like a good idea now, but what about two weeks in when it's become apparent that it's really just a front for The Socialists who want to Destroy America? D'you really want folks tracing that back to you when Zombie McCarthy crawls from the tomb to go Huntin' Reds? Sure you could just ask for your account to be deleted, but that's drastic; maybe you just want a few weeks to think it over...

I guess my feeling boils down to this: it's a nice option to have available, even if I never use it... But if you can't justify making it easier to use, you might as well kill it entirely, since right now it's more trouble explaining it than it is just telling malcontents to email team@ and ask for a deletion.

This is not a terribly popular feature.

Which it is mostly because it doesn't actually work.

Disassociating accounts is temporary. If you create a new account on any of the SE sites, you are forced to associate all accounts again. Else the UI does not allow account creation.

And just logging out and logging in again on any SE site will give you this lovely notification bar:

Welcome to Stack Overflow! Your account has automatically
been associated with 15 other Stack Exchange sites. [x]

So the system is already optimizated to frustrate willful account disassociation. Which is why I would also think it's better to just drop that feature.

(The old account management thingy allowed to individually disassociate accounts. But it's gone. So currently the only choice is re-dissaociating all accounts repeatedly - if you don't want people to know that you once logged on to Wordpress.SE or seriously require fitness advise. Hey, these were just examples.)

On professionally-oriented sites like StackOverflow many people use their real names, on other sites you might not want to do that. You might not want potential employers looking at your SO profile follow the link and look at your Gaming profile. If you have just debunked some crazy claim on Skeptics, you might not want the crazy people making the claim have your full name.

Maybe the disassociate button should just lead to a short explanation on how to use a different OpenID and disassociate the accounts that way.

195
Markdown footnotes?
25
Improve the user self-deletion process
6
Different avatars for different SE sites?
30
How can I disassociate an account?
7
Network Profile Doesn't List All Accounts
9
How do I stop people seeing my associated account on other Stack Exchange sites?
2
WordPress account not showing up on Stack Exchange
2
No mathematics account listed on stackexchange.com

26
Why are people allowed to have multiple user accounts?
4
"Related Accounts" not showing all my accounts?
62
Why would people want to purchase Stack Overflow accounts versus creating a new one?
188
Wiping votes on deletion of highly active accounts (-865 points on "User was removed")
119
Allow users to hide connections between accounts
18
Allow users to anonymize their posts themselves
311
A Pronominal Proposal
583
We're switching to CommonMark
50
Feedback request: Proposed new flagging and moderation workflow for plagiarism