Why was I not notified?

This is what my collider dropdown looks like right now: 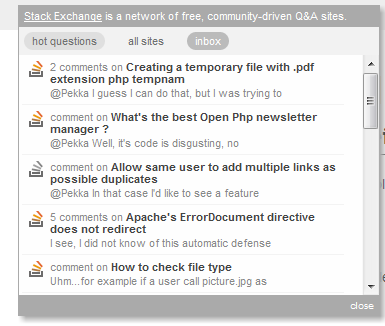 why? Is it because of the trailing dots?

I had a feeling there were notifications missing over the last week or so, but this is the first case where I can pinpoint it.

There used to be a problem where people with dots early in their names were unnotifiable (because the dots would be stripped out and the name match would always fail), but it was fixed, so now dots matter. According to rule 3 of How do comment @replies work?:

If there are more than three characters in @name, then all given characters must match (neither @alix nor @aliceinwonderland will match user Alice).

In July 2014 this exception has been extended, and @Pekka... now works as well.

Not the answer you're looking for? Browse other questions tagged support tags comments edits .

653
How do comment @replies work?
39
cdn.sstatic.net is slowing down initial page loads
6
Using “user name + colon” to refer to a user in comments
29
Be more flexible with punctuation for @Replies
7
Comment, directed to me, not shown in inbox or responses
4
The `dot` in username within first 3 character preventing from comment replies?
3
Could punctuation be ignored in comment notification?

186
Subscribing to questions and comments that don't belong to you
832
What does “user was removed” mean and why did my reputation change because of it?
7
Edit notifications sometimes not being delivered (ND)
1057
Why is Stack Overflow trying to start audio?
952
Firing Community Managers: Stack Exchange is not interested in cooperating with the community, is it?