What does one do with 'angry' users?

If a user is making a valid point but in a rather angry way, what can I do? I don't want to post something like 'please check the FAQ for how to provide a constructive answer' as that's just going to make it worse.

Case in point was Col. Shrapnel in this question. (My answer he took particular issue with, but also to others.)

He has a point, but is being very inflammatory when trying to make it.

Some SO users are just quite ... blunt by nature while trying to be helpful. Think about it for a moment:

When you combine these factors, you sometimes don't know what to think. In that case, involve a moderator.

Col. Shrapnel is making a very valid point in that discussion, and that's the only reason that I did not just remove the comments. Often times, people take meta code snippets as gospel and employ them, without actually understanding what they are doing. He's been screaming about this since he's been a member, and will continue to scream about it until he can't scream anymore. In the scope of SQL injection, I tend to err on the side of caution. The comments weren't really that antagonistic and I'm not going to nuke a conversation over an answer to a security issue unless there's no way to salvage it.

I'm not digressing, I'm reinforcing my point. Let the site moderators help you when you think you've run into something like this. If you encounter someone with a high reputation score that is seemingly difficult, there's a very good chance that we've encountered them many times before.

Involve us as soon as you see things turning into a boxing match and stop interacting with that person until we intervene.

Use the 'flag' link on the question or answer that contains the argument, and tell us what's going on: 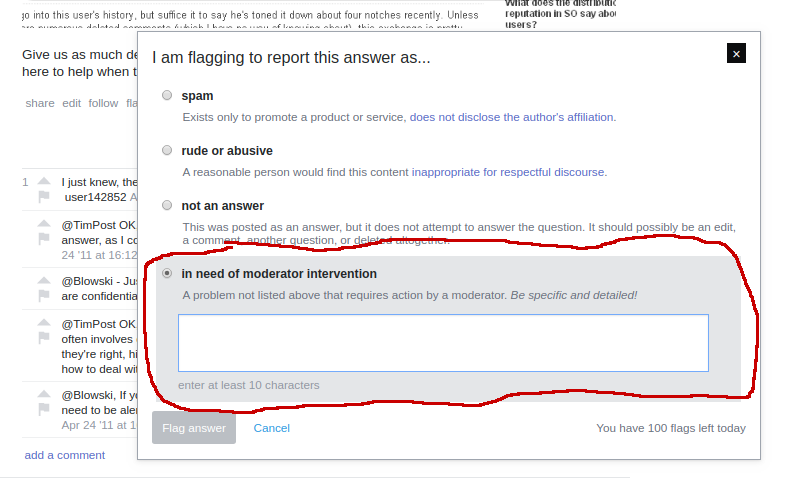 Give us as much detail and background as possible, then send the flag. We will look into it, we're here to help when these kinds of disagreements happen, preferably before they resemble a war :)

I truly think the answer to this is:

If someone's having a bad day, week, life, whatever - there's not going to be much you can do to chill them out if they decide to take it out on the internet. You just want to avoid that bad energy altogether and not let it rub off on you.

Give them the benefit of the doubt at first, give some honest feedback, and if they aren't willing to listen or have an adult conversation, then just move on. "Don't feed the trolls" as they say.

Be very careful about attributing emotions to other users. You're reading brief, hastily-written text, a medium not well-suited to the task of easily or accurately conveying emotion. For all you know, the user you see as shrieking mad may be writing his comments while lazily sipping iced tea on his porch swing, your conversation merely an idle distraction.

And yes, I realize the futility of bothering to write that. Upon seeing criticism of an answer you've spent time on, it's natural to become defensive, and take the worst possible view of whoever bothered to speak up.

Some users are reluctant to critique the answers of others, either via comments or down-votes, fearing the discord that so often results. The site is worse for it. It's often not enough simply to post a good answer; much can be learned from reading the criticisms of others.

If someone criticizes your answer on technical grounds, strive to ignore their tone and focus on the validity of their arguments. If they attack you for other reasons, do as Tim suggests: flag and move on.

So my general advice is try to go into every discussion with an open mind, try not to take offence if something seems rude (easy said I know). If you can, see the value in it.

If the discussion turns into personal comments, snide remarks and attacks without any useful content, flag it and walk away.

If you believe that person has a valid point, you can always reply in a polite way and ask to provide a thorough explanation or even invite that person to edit the answer to correct the mistake. That way you avoid the flame war, provide a better answer to the original question, and even learn something yourself.

If you believe you are right, you can add a formal proof in an updated answer or, if it's not worth, ignore. There will always be somebody wrong in the internet!

That user has an infamous history of being rude; he's not usually downright offensive or extremely rude, he's just borderline: the problem is that he's been that way for years.

I think we should ban him once and for all; even though he's an active member of the community who very often posts answers his rudeness brings more bad than the good of his contributions.

Note that none of his comments/answers warrant a ban on their own; it's the fact that he's constantly been borderline for over a year that does.

I want to say it somes with the territory, but I hope that it is something rare and not a frequent behavior. Stick to the facts - people may have different opinions, but facts cannot be disputed. Be the better person and never add fuel to the fire.

Not the answer you're looking for? Browse other questions tagged discussion users behavior .