Ask Question
Asked 12 years, 5 months ago
Active 2 years, 9 months ago
Viewed 11k times
216
This question already has an answer here:
Do Stack Overflow and other Stack Exchange sites have an app I can use? (1 answer)
Closed 6 years ago.

I found this one on UserVoice, and I thought it was fitting to bring it up here for further discussion.

"Stack Overflow already works with Mobile Safari, but the experience is far from optimum. I believe an iPhone-optimized version (or maybe even a native client) would be perfect. I can help with either."

I personally think a some kind of mobile version of Stack Overflow would be great for using as a reference, but using it to ask questions would probably get cumbersome if you had to type up a long question with full description. However, using it to look up an answer when you're away from your desk would be awesome.

But, why not just use the regular Stack Overflow? Well, we all know that the small, touch screens get cumbersome to use when navigating websites built for desktops.

One thing that I often find myself doing is checking the status of my questions (or reputation, answers, votes, comments, etc.) Perhaps that would be a good place to start - optimize for viewing profile information, reputation information, and browsing questions - rather than editing.

A mobile might be a good idea for those who can't access the web version for some reason.

I know these might sound a bit contrived, but you get the idea.

My concern with mobile is that we will get short Twitteristic answers like this as opposed to well thought out 300 word Skeetistic masterpieces.

My #1 request is to remove the JavaScript Markdown preview on mobile platforms.

I can only do Stack Overflow readonly on my iPhone — which I use for 80% of the time—because the JavaScript Markdown previewer makes the page jump all over the place while I type; always ending up at the top of the page (whereas the box I'm typing in is at the bottom of the page).

(This was typed in the notepad of my iPhone and copied/pasted here. It is possible just extremely inefficient)

I posted the original suggestion on UserVoice, and I later developed a native iPhone application (as discussed here, the screenshots are from an older version).

Now, back to reality. The RSS feeds don't provide enough information (votes, views, etc.), and therefore the app parses the XHTML, which is quite fragile. Given the time it takes for Apple to approve new versions and bug fixes, even seemingly small changes in the markup could cause the app to stop functioning for weeks, and this is precisely why I haven't released the application yet.

That being said, if an official API is ever released, we can have a fully functional app in a matter of weeks.

As I've said before, the app will of course be completely free, and I'm willing to publish the code under GPL. 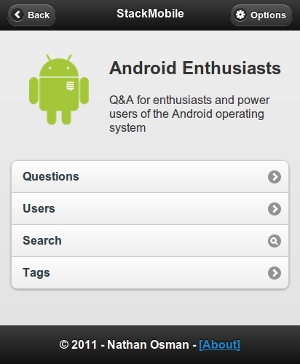 On my (admittedly poor) mobile phone (an LG Dare), I realized yesterday I was unable to search SO at all. I can enter a search term into the search box, but then...there is no search button. I tried poking at that little magnifying lens icon with the tiniest part of my tiniest finger, thinking maybe that was the search button, but (as I have since verified) it is just a pretty picture. So, at a bare minimum, can we at least get a proper search button?

What I'd consider important (I think this is a wishlist thread by now) is a fallback solution for the Ajax functionality. For some reason, Opera Mobile on my HTC (but I think I have seen other users talk about this) doesn't work well with the Ajaxy stuff. Examples:

I realize that this is probably an Opera Mobile issue [if someone knows of a fix, I'd be glad to hear], so a fallback solution for this will be a low priority thing. On the other hand, I don't personally care about an iPhone app ;-)

267 KB (as of, er, just now) is a bit heavy for a mobile front page too (figure according to Pocket IE) - if you are going to have an iPhone client, a Windows Mobile client would also make sense.

To go down the mobile optimised web approach, there are a few obvious tweaks (smaller font sizes), and a few less than obvious ones (don't show comments by default).

When I answer a technical question on Stack Overflow, I generally write some code, run it through the compiler to check it, and then post all or selected bits of it when I'm happy that I'm both conceptually and syntactically correct. I can't see how this can be done on a mobile (for example, you can't host iPhone development on an iPhone), and I believe it would result in a lowering of quality of answers.

Also, I believe the mobile phone is the invention of Beelzebub, but that's another issue.

I have been hacking around with this: 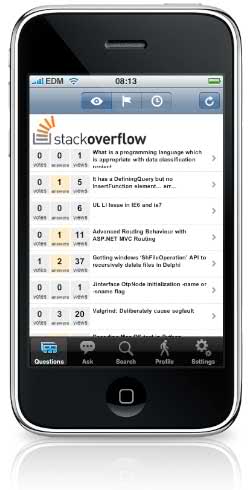 I think a mobile version is a great idea, and I'm curious what percentage of mobile users are iPhone users. Perhaps a mobile version specifically geared toward the iPhone is in order if the numbers are great enough?

For example, look at what Google has done on their apps such as Mail, Reader, Calendar, etc. No need to go to those extremes, but those apps are nearly as good as native iPhone apps. Perhaps better in that they don't require a download or updates.

I'm really satisfied browsing Stack Overflow via my iPhone except for one thing:

Large blocks of code are missing their scrollbars in Safari.

I found several applications for iPhone. I have downloaded both and tested them. If you want to play with them, then you can find it here: 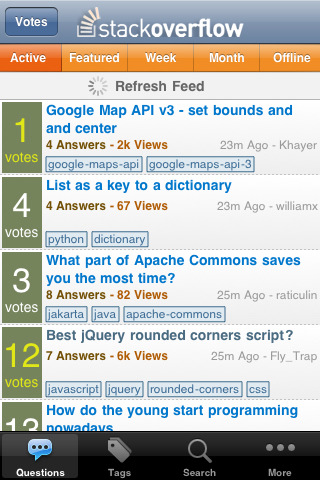 Can this question be like a "tracker" question for related bugs? I don't really get how using Stack Overflow software for bug tracking works - if indeed that is what we are supposed to be doing. But I didn't find anywhere else to file bugs.

Anyway, this is a more specific request that would be excellent as part of general mobile-display-related improvements: A user search option from a mobile phone.

I've been using Opera Mini in Mobile View to visit the Stack sites quite happily for several days now - not been near a PC for a week. It works very well, apart from the lack of help adding tags and of course the impracticality of typing much code on a phone.

For Android you can use Droidstack to view. And don't forget SOflair.

SO works fine on my HTC Incredible browser except that the answer/comment box is too wide.

StackTrace for iPad is available now. You can get it in the AppStore.

With StackTrace, we have taken a unique approach to consuming Stack Overflow content. Instead of focusing on finding answers to your current problems we're tailoring the experience for reading and discovery. There is significant, great content on Stack Exchange and lots can be learned from reading the experiences of others. A bit more of our approach can be found here.

I have an application I've been building for fun based on the Stack Overflow CC data dump. I've created my own API that sits on top of it, so it isn't a massive application with all the data sitting in it. I'm wondering if anyone would want to beta. If I could get four or five people and some feedback maybe it is worth submitting to App Store. If anyone is interested you can contact me.

I never had any beta takers, so I went ahead with what I had. It is now live in App Store for those who are interested: iTunes link. I'm still looking for beta testers if people are interested since I have some more ideas and I would like to have input.

If the 'full version' continues to display, scroll to the footer and click "Mobile".

Not the answer you're looking for? Browse other questions tagged feature-request status-completed stack-overflow mobile-web iphone .