On the Election page, the column on the right (containing some stats, a text box beginning with the phrase "In the election phase, 10 candidates...", and any votes you've cast) overlaps the candidates' blurbs. 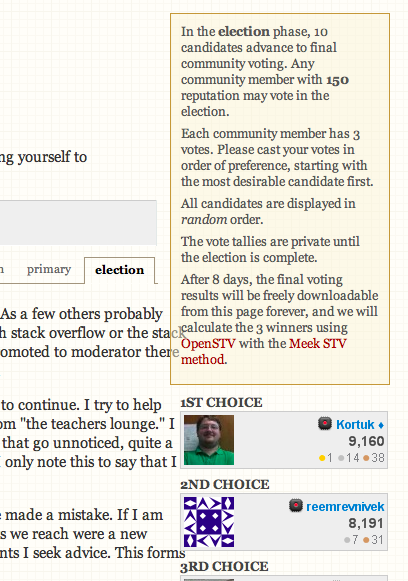 Just the votes, after scrolling down:

Only the first blurb is obscured by the text box (and, admittedly, only slightly obscured - The box is semitransparent), but the votes scroll with you all the way down the page.

Bumping this because, hopefully, some of the devs will be willing and able to vote on the Stack Overflow election, making it no longer status-norepro, and fix the bug.

I can't repro this in Windows 7 at all:

It could be some kind of font issue with your installation of Windows XP, but that font list is very generic.

Are you "zooming" the page or fonts in any way?

Not the answer you're looking for? Browse other questions tagged bug status-norepro markdown election .