Hello,
After reading this morning's blogpost I thought I'd share just one random idea I had to help encourage / simplify up-voting on questions from a UI perspective: 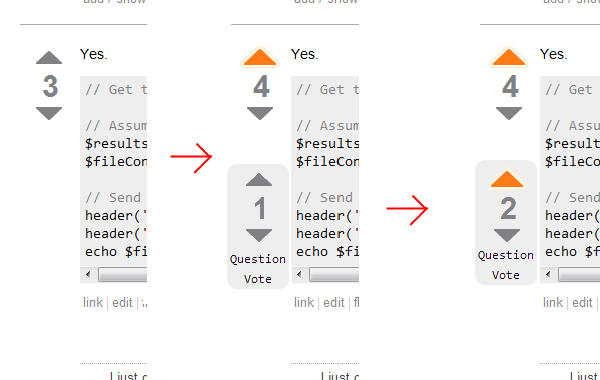 This is obviously very crude, but I believe the idea is fairly simple:

Please let me know what you think. Thanx, T.J.

Updated based on feedback from @JacobM (Thank you) 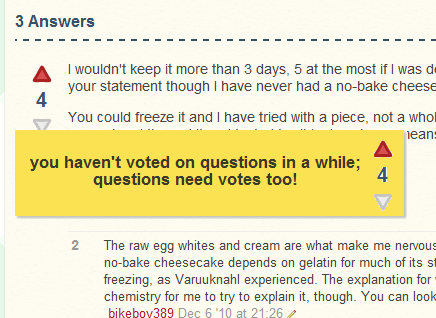 I suppose the confusion here would be what exactly the voting control in the popup is for. It may not be immediately obvious that its for the question.

When doing UI design, especially for tasks that people do quickly, I tend to make the assumption that nobody reads anything. So I fear that having two sets of arrows would be confusing, even though one of them was labelled as pertaining to the question rather than the answer -- I just think the eye would pass over the label and it would make answer voting a bit harder, which we don't want to do.

Perhaps an alternative would be a popup, when you vote on an answer, that says "What did you think of the question, by the way?" and lets you vote on the question right there in the popup. Maybe have that come up only occasionally, or only for questions that haven't gotten many votes, or only for users who haven't voted on a question in a while. It's similar to what they started doing recently, but adds in your idea of making the question voting easy.

If the goal is to encourage voting, I believe the simplest means is to award +X (not sure what X should be) points for every day that you hit your voting cap (which includes voting on questions). Once that policy was implemented, I am sure there would be a measurable increase in voting.

I don't think this UI change would help much. Give positive reinforcement for the behavior your want.

Not the answer you're looking for? Browse other questions tagged feature-request questions voting user-interface .

916
Show all of my question/answers to me even if they are deleted
691
How do I get attention for one of my own questions without a good answer?
888
Why aren't people voting for questions?
131
The Electorate badge discourages voting on answers
21
Display close votes for all users
562
Exit strategies for “chameleon questions”
430
Is cross-posting a question on multiple Stack Exchange sites permitted if the question is on-topic for each site?
573
What is serial voting and how does it affect me?
45
Encourage people to “Pay it forward”