Show “this question has an active bounty and cannot be closed” earlier, when it applies

If a bounty is active on a question, that question cannot be closed. However, attempting to vote to close works just fine until the "Vote to close" button is pressed. Only then does the "this question has an active bounty and cannot be closed" message pop up.

There may be a technical reason for this, but there's no workflow reason for it. Please show the message as soon as the "close" link is clicked.

As of v1.50, my SOUP user script now contains an implementation of this feature.

The way I implemented it is by detecting the presence of the bounty notice on the page and, if it's there, disabling all the radio buttons in the close popup that don't open a submenu. This should make the dialog obviously and visibly non-functional (and also impossible to submit, since you can't actually select a close reason), while still preserving the other functionality of the popup (i.e. checking to see which reasons earlier close voters have picked).

There's also a bit of extra code for handling the close-as-duplicate subdialog, allowing you to search for potential duplicates and to see which duplicates others have picked, but not to actually select and submit one. 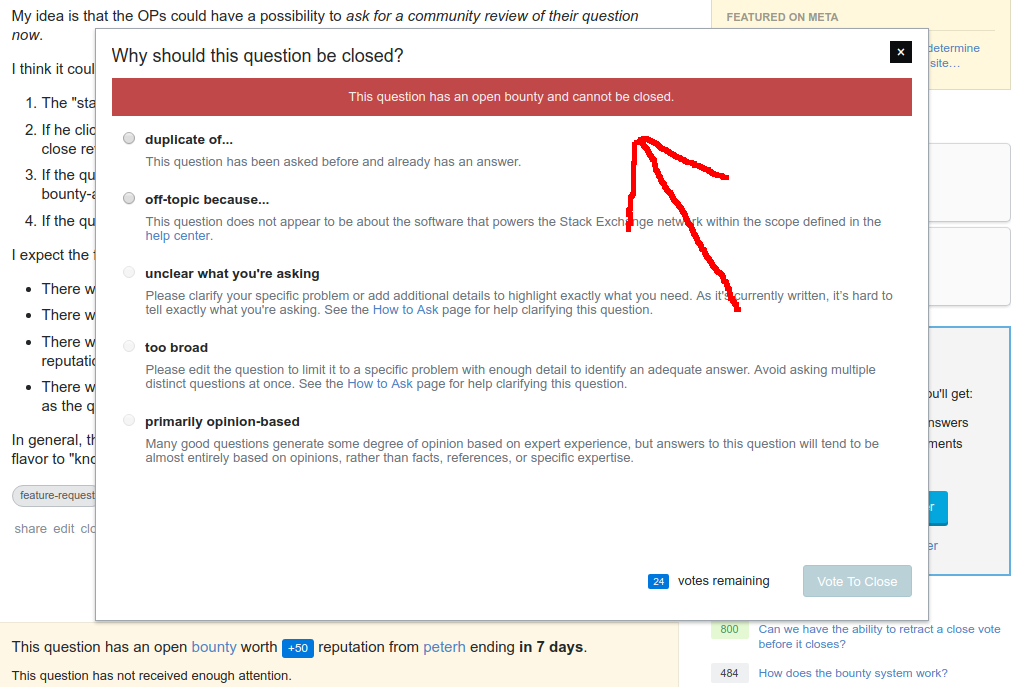 (The freehand arrow in the screenshot is probably redundant. To do: Localize the message into languages other than English.)

In some later version of SOUP, I may consider replacing the current implementation with one that leaves the radio buttons enabled but instead "super-disables" the submit button, since I did actually end up adding such a feature to SOUP for another feature request. But for now, the current implementation seems to work fine. (Any reports of unexpected side effects are, of course, welcome!)

Not the answer you're looking for? Browse other questions tagged feature-request bounties vote-to-close .

538
How about a “Vote not to close” option to counter the “Vote to close”?
583
How does the bounty system work?
417
Decision on rejected edits should be displayed as a notification to the editor
107
Allow users to vote to close bountied questions
117
Close vote review audit flawed - fails without casting vote
402
Add an “I don't understand” option for review audits
250
Increase close vote weight for gold tag badge holders
186
Can we clarify to the OP that their question is not yet closed and the duplicates are only suggestions?
342
New UI encourages askers to confirm or dispute duplicate votes