Can we raise the awareness that question downvotes are now free?

See also: Should downvotes on questions be "free"?

Ever since downvotes for questions have been made free, I find that I've been more actively voting (both up and down) on questions. The old -1 rep penalty was a major deterrent for me for downvoting terrible questions, especially when there are so many of them and the askers have no intention on staying in the community. Voting to close was my main way of dealing with these questions. I know many people feel the same way.

Unfortunately, I don't think many people who regular Stack Overflow but not meta are even aware of this change. They too probably would be voting much more had they known.

For example, there was a question that came out which was essentially a "plz send teh codez!" kind of question. I saw the question and the request and saw this is not a question for Stack Overflow so I downvoted it and voted to close as NARQ. It took a little while but as others saw the question, they agreed and voted to close it. As of right now, the question only has two downvotes (mine and the NARQ close). Immediately after closing, the person "asked" again the same question. It immediately was closed as being an exact duplicate of the previous question. It only has one downvote (mine). I bet there would be a lot more if people were more aware of this.

Is there anything that can be done to raise awareness of this change? I think the more people start using it, the less likely we'll see 0 vote bad questions and the better Stack Overflow will be. I added a comment trying to point out that it is free now but it was too late and I don't think people have seen it. Perhaps a one time reminder when you vote to close a question as off-topic or not a real question?

Here you go, just upvoted this question, I hope it raises awareness :)

Looking at trends, question vote awareness is at all time highs. 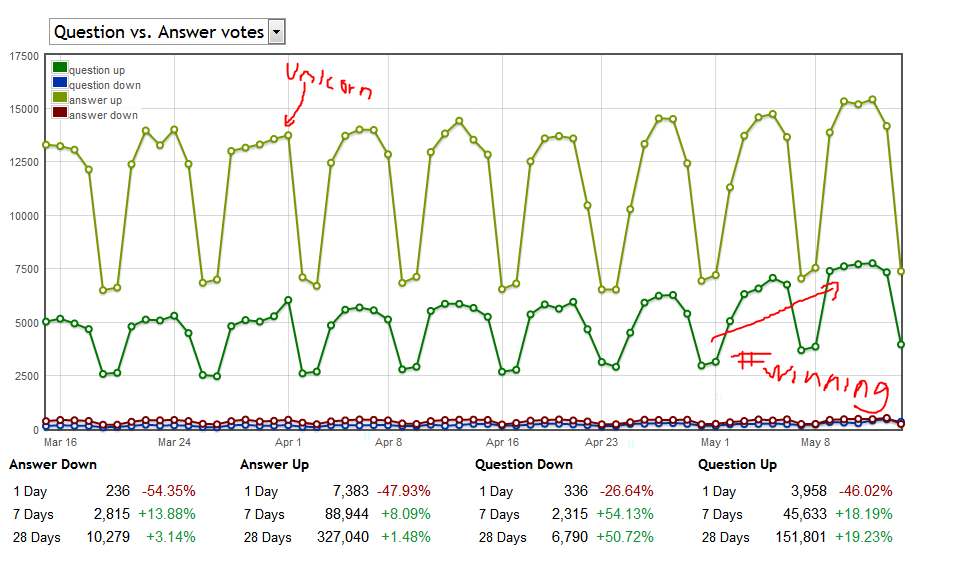 Only extra things we could possibly do are site wide banners, inbox messages informing users of the change and a blog post. Personally I do not feel any of theses are necessary at the moment.

I just got -1 for a downvote on StackOverflow.com, but I thought that they were free?

(Yes this is on another users question, not a downvote on my question)

On June 13th -- and all the /faqs and other pages are up to date, so I believe that's about all we can do.

Site wide banner for couple of days, same like we had with the major change in reputaion when upvoting Question started giving only 5 reputation instead of 10.

This will surely draw the required attention, also like poor Kragen learned the hard way, mention that downvoting an Answer still cost one full reputation point. :)

Not the answer you're looking for? Browse other questions tagged discussion feature-request status-completed questions down-votes .

133
Should downvotes on questions be "free"?
3
Create easy way to "send back" bad questions
-7
Losing points when voting down

852
Can we have the ability to retract a close vote before it closes?
716
How do I get attention for one of my own questions without a good answer?
921
Why aren't people voting for questions?
1490
Fastest Gun in the West Problem
1840
Could we please be a bit nicer to new users?
1246
Don't throw away all votes when a user is deleted
2788
A Terms of Service update restricting companies that scrape your profile information without your permission
2501
Firing mods and forced relicensing: is Stack Exchange still interested in cooperating with the community?
2252
Stack Overflow is doing me ongoing harm; it's time to fix it!