Don't get me wrong - I love that duplicates are now automatically detected and stopped from being posted. But there are edge cases where this new feature is a problem, and prevents real work from getting done.

On Super User, we have a weekly Question of the Week. A meta post is created, and users can submit their nominations for QotW as answers. Votes on the answers to the meta post choose which becomes the QotW, which then goes on our blog.

Obviously, there isn't much need for changing the actual text of the question from week to week - it's always the same little blurb about what the QotW is and how the nomination and voting process works. As such, the system detects these as duplicates and outright prevents me from posting - not just a warning, but it stops me and won't let the post be submitted.

There is a temporary workaround (I'm not going to disclose it here; devs, feel free to ask me about in chat or by email) by which I was able to post this week's QotW, but long-term, it's a pain. Also, the loophole will probably be closed eventually.

What I am proposing is that moderators be exempt from this restriction, at least on their child meta sites. Mods should understand the system well enough not to be posting true duplicates, and the restrictions have gotten in the way of legitimate work in this case.

Here is a screenshot of the error message and text: 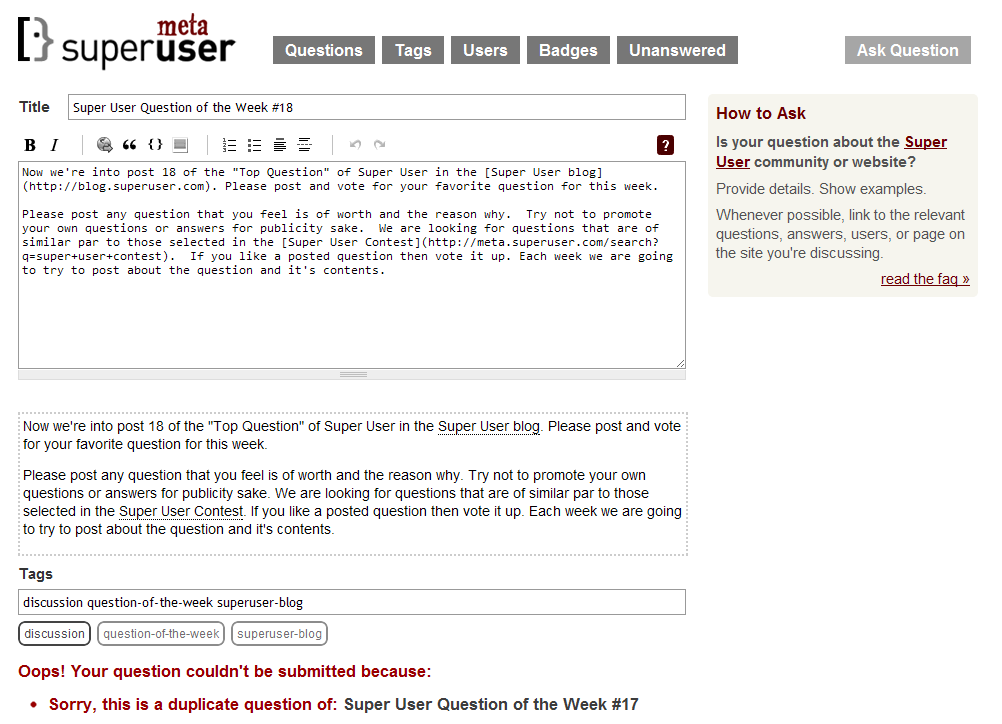 -107
Moderators should not close crap, flamebait questions, let the community

1799
Could we please be a bit nicer to new users?
435
Reward finding duplicate questions - +10, +2, -5
324
Stack Overflow is getting a Meta of its own
312
Operation 'Split, All The Metas!' Shall Commence On April 16, 2014
330
Gold tag-badge holders and moderators can now edit duplicate links
826
Net Neutrality and Stack Overflow / Stack Exchange
2423
Firing mods and forced relicensing: is Stack Exchange still interested in cooperating with the community?
578
We're switching to CommonMark