Tracking how close I'm to the Civic Duty badge on the main Area51 site?

On the Area51 site, there's a Civic Duty badge, which has the same requirement of 300 votes as on the other SE sites. Some people (46 as of today) have event been awarded it, so it does exist!

However, I can't seem to find out how many times I've voted to know how close I'm doing. My profile info doesn't show the voting counts, only voting on questions I've proposed. I can track Not A Good Example via the reputation tab (they show up as a red zero, I think a recent change), but the rest don't show anywhere.

As I understand it, the usual answer in the case of "How close am I to this badge" is to perform a query against the data explorer once a month. Unfortunately, Area51 isn't available on the data explorer, and I've just been told that this can't be changed any time soon due to schema differences.

So, in the absence of a data explorer, any chance there could be a new feature to allow a user to track their Area51 voting?

Note - this doesn't related to the Area 51 Discussion site. While that does show vote counts, it has it's own set of badges, and the award list for the two sites is different

I'm pretty sure that the badge is awarded based on your discussion zone profile. At least, that's where the badges and the "Votes Cast" statistics are displayed.

To get to it from your Area 51 profile, click the "discussion user" link underneath your gravatar: 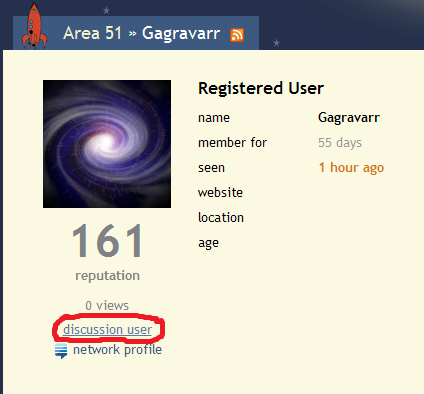 Not the answer you're looking for? Browse other questions tagged discussion feature-request status-completed area51 badges .

4
Any plans for a Data Explorer for Area 51?

538
How about a “Vote not to close” option to counter the “Vote to close”?
114
Electorate, Pundit, etc badge progress
810
What are the badges I can earn on each site, and what are the exact criteria for earning each badge?
171
Asking days badges
375
Updating the Hot Network Questions List - now with a bit more network and a little less “hotness”!
2456
Firing mods and forced relicensing: is Stack Exchange still interested in cooperating with the community?
579
We're switching to CommonMark
734
New Feature: Table Support