Is the Very Low Quality flag too ambiguous?

It is the analog to the mommy mommy flag (which my 1.5-year-old child raises quite frequently). It provides no real clue as to what the flagger really wants us to do with the post.

Should we get rid of this flag reason?

Is it just me? Should and can we replace it with something better?

EDIT I accepted Jeff's answer. The tougher wording has heavily decreased the amount of very low quality flags. We now see only about 25% of the amount we used to and they are usually valid. Additionally, we now only allow very low quality on posts with a score of 0 or lower.

VLQ means the flagger thinks this post is beyond saving -- no amount of editing or polishing will turn this particular turd into gold. It is a call for a pooper-scooper. To clarify this, we are making the language a bit stronger:

Essentially this is synonymous with flag for removal. Both for the post and implicitly for the user who created that post … if they accrue enough of them.

The presence of the VLQ flagging option -- and note that we now only allow VLQ on posts with a score of zero or lower for the first seven days -- is exactly like a "no dumping" sign. It tells flaggers, and anyone else that cares to look, that toxic waste (aka extremely low quality content that can't be salvaged through any sane amount of editing) is not allowed in our community. It's right there on the sign in the flagging options: we don't tolerate posts, or users, that consistently pollute our system by dumping crap in it: 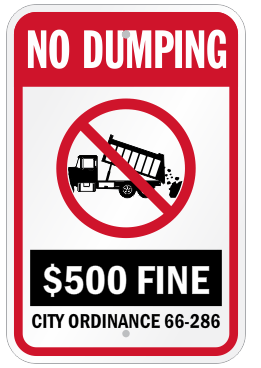 Whereas a downvote means "maybe this user is just having a bad day", a flag for low quality means this post, and possibly this user, are totally stinking up the joint and need to be ejected from the premises ASAP.

(And note that in cases where you feel very strongly, you can vote down and flag as low quality to hasten that process.)

Two changes we're making to improve the handling of this flag:

This suggestion has been misunderstood, misinterpreted as a joke even... Which is fairly appropriate, given its brevity - perhaps someone should have flagged it VLQ! So I'll elaborate a bit...

‘Twas a dangerous cliff, as they freely confessed,
Though to walk near its crest was so pleasant:
But over its terrible edge there had slipped
A duke and many a peasant;
So the people said something would have to be done.
But their projects did not at all tally:
Some said, "Put a fence around the edge of the cliff"
Some, "An ambulance down in the valley."

There is a never-ending stream of new users on Stack Overflow. Users who really don't "get" the whole "Q&A" thing. Folks whose entire experience with user-generated content is comprised of participation on forums, or Twitter. Reddit users...

A great many of them have nothing useful to contribute. If, upon encountering their first worthless answer we delete it with prejudice and move on, that's probably ok - if they don't come back, we've lost nothing of value. Building a fence just causes them to leap the fence before plummeting to their demise... We're better off funding the ambulance.

So no worries, right?

Except it sends the wrong message. Or rather, it doesn't send any message at all - a user with a history of this sort of answer might get a message from the moderators, or might get silently question banned, or might just get deleted. We've not only built a cliff that's easy to fall over, we've somehow made the landing so painless that folks repeatedly jump until their skull cracks on the rocks below. And the folks standing at the top are encouraged to just call 9-1-1 and quietly wait for the next clumsy oaf to stumble along...

We've put up a "no dumping sign", and then built a system to silently make trash disappear. There is no $500 fine - we'll cheerfully clean up after you... Until we get fed up and just kill you.

Indeed, we're far more careful about marking overtly malicious posts: Spam and Offensive flags result in an automatic down-vote (from the Community user though, not the flagger). This prompted my revised suggestion:

Why not make the flag act like spam flags, where it also subtracts from the post's score, at least unless/until it's dismissed?

BTW: there's another problem with VLQ... Folks still don't differentiate between VLQ and "Not an answer" when it comes to answers. And there's no feedback there either; both flags will tend to result in the answer being removed.

I like the idea of an automatic down-vote because it fits well into our existing system. Down-voted posts are de-emphasized, and less likely to waste readers time until the flag is handled. Authors of down-voted posts are encouraged to improve them. Voters are encouraged not to take down-voting lightly. And any reputation lost to a down-vote will eventually be restored once the trash is taken out. For the vast majority of users posting crap, it won't make any difference. For the majority of flags, it won't seriously inconvenience the flagger any. And for the handful who really just need a brisk slap in the face, it's immediate feedback telling them that this isn't Reddit.

We can have the fence and the ambulance.

I always assume "low quality" is a flag for removal. If the post can't be salvaged through editing then I close it as "not a real question" to give the OP a chance to edit it into shape themselves. After time it can be deleted.

I've already stated elsewhere what I think of "low quality" flags on answers, but given the number of low quality questions we get every day on Stack Overflow, I think we still need the flag for questions.

I think the need for the flag outweighs just how much it clogs up the queue, however I would suggest (if we're going to revise it):

In other words, I don't see why the community can't be handling these almost 100% of the time. Moderators can then deal with the stuff that can't be salvaged.

Not the answer you're looking for? Browse other questions tagged feature-request status-completed flags low-quality-posts .