How and when should we use the "invalid flag" flag? [closed]

Ask Question
Asked 10 years, 7 months ago
Active 7 years, 9 months ago
Viewed 546 times
21
This question was closed because it could no longer be reproduced. It is not currently accepting answers.

I found the "invalid flag" option, and have used it a few times. Mostly where someone's flagged a post as "very low quality", but it's either been fixed or it was never really that bad. But it seems that every time i pick "invalid flag", my own flag gets marked as invalid. (And the 3-4 "invalid flag" flags seem to be the only ones dismissed as invalid since they started being tracked that way.) Being a bit of a score whore, it annoys me to see stuff marked as invalid. :P 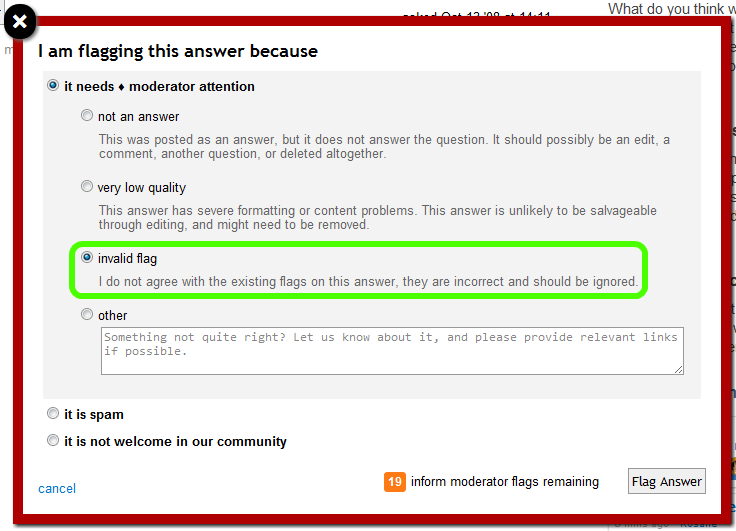 Am I just using the "invalid flag" flag wrong? Am I being too tolerant of bad questions/answers, or too strict about what I consider frivolous flags? Are there some kind of guidelines for when i should be flagging flags as invalid?

Mostly where someone's flagged a post as "very low quality", but it's either been fixed or it was never really that bad.

Perfect you are using the flag perfectly. "very low quality" means it CAN NOT be salvaged, if it was salvaged the flag is clearly invalid.

Use the invalid flag option (which is only available in tools/flagged) to disagree with the people who flagged the post.

But it seems that every time i pick "invalid flag", my own flag gets marked as invalid. (And the 3-4 "invalid flag" flags seem to be the only ones dismissed as invalid since they started being tracked that way.)

There was a bug, I went ahead and fixed the history. New behavior: if any flags are marked invalid, no users receive any flag weight changes for that entire batch of flags regardless of how they are handled.

I just amended the UI so it is much more intuitive both on the mod side and the 10k tools side.

I wish people were more liberal with the Very Low Quality flag, at least on StackOverflow. SO gets enough questions that it can afford to throw out more, and would be a better site for it.

While most people seem to think it's only for things that can't possibly be salvaged in any way, I think we'd be better off treating it as "not worth spending the time to fix". Some posts, even after being edited to be coherent, still wouldn't be anything special.

I recently read something that said managers should spent something like 80% of their time with their best employees--making sure they have what they need and keeping them happy-- and very little with their worst ones (hopefully someone will be able to find a link). I think the same concept should be applied to people's posts. Let people use flags for the awful stuff (which is quick), delete it and be done with it. We should be encouraging people to spend their time not on making bad posts tolerable, but on making good posts great, which I think is a much bigger net gain for the site.

In addition to the formal description, Jeff has given some other advice on use of the Very Low Quality flag:

To me these cast a somewhat wider net than requiring that something be totally unsalvageable, though judging by another of his posts Jeff still favors a very narrow interpretation. So I guess I'd like to flag more than Jeff wants (and I've backed off on flagging borderline cases). I just don't see why people should be so attached to low quality posts that will almost certainly be replaced very quickly.

I also think it'd be nice to flag bad answers when the question has good answers that cover the same points, but I'm still in the testing phase to see if there are any moderators that agree with me.

Not the answer you're looking for? Browse other questions tagged discussion flags best-practices .

97
Is the Very Low Quality flag too ambiguous?
68
Which actions using the 10k-moderator-tools do really help the diamond moderators?
26
The limits to a Very Low Quality answer
22
10k+ users can see flags now, but can't unflag
9
Community Wiki Reboot
13
What was the "invalid flag" flag? What was the "10k flag queue"?
23
"Invalid flag" flag in 10k tools creates potential for flag state superposition
6
Should I disagree with a VLQ flag but also vote to close?

1086
Should 'Hi', 'thanks', taglines, and salutations be removed from posts?
95
Allow moderators to reverse and/or nullify flag decisions
56
Hide "not an answer" and "very low quality" flags in the moderator flag queue
408
Graduation, site closure, and a clearer outlook on the health of SE sites
418
Can a machine be taught to flag spam automatically?
171
A machine can flag spam automatically. Can it do better?
360
Let's take a look at the interaction between staff and the "power users" of the network
2482
Firing mods and forced relicensing: is Stack Exchange still interested in cooperating with the community?