Ask Question
Asked 8 years, 8 months ago
Active 5 years, 10 months ago
Viewed 320 times
22
Closed. This question is off-topic. It is not currently accepting answers.

The new flag queue for 10k+ users is very interesting, but it lacks a crucial feature: Actually disagreeing with the flags shown.

Also, if I understand it correctly, questions disappear from the queue once they have been closed, so there is no way to review the 10k+ community's recent decisions.

As it stands, I don't think this is going to do good - it'll help a lot in the case of genuine crap of course, but it'll massively increase the number of unjustly closed contributions because it sends a huge mob (i.e. us) towards everything that got flagged.

Am I overlooking some hidden wisdom? How is this feature supposed to work?

The new flag queue for 10k+ users is very interesting, but it lacks a crucial feature: Actually disagreeing with the flags shown. 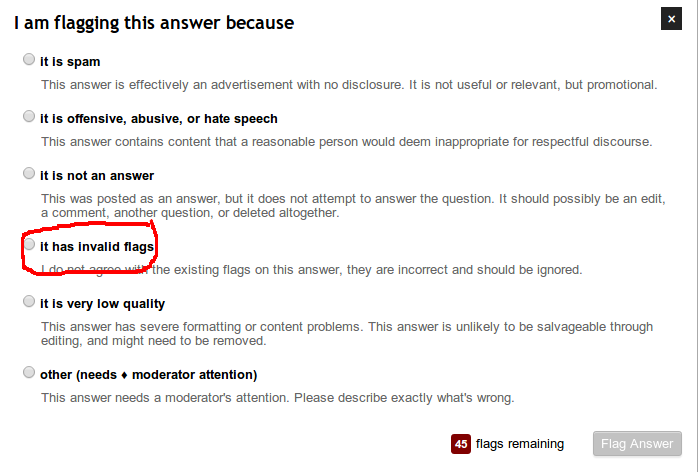 It has invalid flags
I do not agree with the existing flags on this answer, they are incorrect and should be ignored.

Remember, flags don't directly cause any effect. They only serve as an indicator to moderators about what should be done, such as in case the community members cannot directly intervene (i.e. deletions, or sub-3k closures). So to that end, you can influence the resolution against what others have flagged if you can provide substantial points in your own flag to explain why that flag is invalid.

Note that as mentioned in the post I linked, flag weight is... oddly handled at the moment. But disregarding the effects on flag weight itself, there is well enough ability to disagree with the provided flags.

If you're concerned about the actual community actions taken from it (such as accumulated close votes) prior to any moderator intervention, it's no different than how it is with the close tab on the 10k tools. You have all the same faculties to oppose those closures as you do with any closure actions suggested by the flags. Stand by and wait for reopen, voice your reason in comments, and similar other options all work to indicate disagreement.

Not the answer you're looking for? Browse other questions tagged discussion flags moderation flag-queue .

7
Flag or disagree won't let me disagree
36
Flag declined, but question closed for the same reason
21
How and when should we use the “invalid flag” flag?
21
Separate the “disagree” option in flag review interface
3
Why do “disagree with flag” votes have to go through a moderator?

41
Show the number of flags beside the “tools” link for 10k users
6
Can 10k users still see spam/offensive flags?
36
Should we focus the moderator flag queue?
36
Up/down voting on questions in the close votes review queue
70
How to train your growing community to self-moderate?
65
Can we have a system to submit potential robo-reviewers for moderators attention?
61
Question flags, queues, edits, roomba, community♦, how does this actually work?
324
Gold tag-badge holders and moderators can now edit duplicate links