Why is it possible to vote for deletion/undeletion more than once? [duplicate]

Ask Question
Asked 13 years ago
Modified 9 months ago
Viewed 1k times
49
This question already has answers here:
Restrict the delete/undelete vote privilege to once per post (4 answers)
Closed 9 months ago.

But if you vote to delete a question and it later gets undeleted, you are allowed to vote to delete it again, and (I assume) the same goes for undeleting. Why the inconsistency?

I can think of two possible reasons:

Is one of these correct, or is there another reason?

Note that this has resulted in delete/undelete conflicts, even between moderators and users: 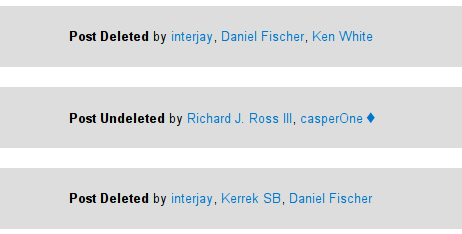 I forget why we didn't apply it :)

Seriously though, we haven't seen widespread delete/undelete wars. Before adding additional rules/complexity, we like to see how the community uses a feature.

There have only been 111 questions on Stack Overflow where someone's cast more than one delete vote.

This includes questions where a delete vote was cleared by re-opening and then later re-applied after re-closing, but excludes situations where folks deleted/undeleted/redeleted their own questions and those where moderators did the same.

Many of the questions involved are extremely long-lived poll questions that were controversial well before we even started tracking this stuff, so the actual numbers might be slightly higher; still, there does not appear to be any broad pattern of abuse.

Why hasn't this been abused?

Well, closing and deletion aren't really separate systems - deletion requires closing, and because of this there really isn't much opportunity for it to be abused. A close-reopen war can occur on any question, but for a delete-undelete battle to occur, you need:

Undeletion is pretty rare, but over half of all questions that do get undeleted by vote are then re-opened, invalidating any pending delete-votes and preventing any new ones. Because delete-voting requires that a question be closed first, you'd need a fresh set of close-voters to even have a chance at casting a second delete vote on a re-opened question.

Not the answer you're looking for? Browse other questions tagged bug status-completed 10k-tools vote-to-delete voting-limits .

72
Restrict the delete/undelete vote privilege to once per post
14
Why are users allowed to vote to delete/undelete multiple times?
5
Same user can delete/undelete a post more than once
188
Do not delete good duplicates!
19
Reviewing Edits - what counts as plagiarism?
5
After voting to close, delete and reopen, I can't cast a close vote
11
Can we make delete votes work the same as close votes?
5
Why don't delete votes expire?
3
Why doesn't a change in question content allow users to revise their close/open votes?

146
Improvements to a suggested edit cannot be submitted when the suggestion is approved during editing
108
How can we stop premature deletion?
156
Delete votes from users who later become moderators shouldn't prevent community undeletion
14
"0 more vote(s) needed to delete this question"
46
Make the pop-up for retracting your delete vote different from the pop-up for casting it
52
Make the "delete" button different when you already voted to delete
13
It's possible to retract and re-cast a delete vote on answers, contrary to the tooltip's advice