How does a Stack Overflow moderator know about sockpuppets? [duplicate]

Ask Question
Asked 11 years, 1 month ago
Modified 6 years ago
Viewed 1k times
-20
This question already has answers here:
How can you detect if users have created sock puppet accounts? (3 answers)
Closed 6 years ago.

How does a Stack Overflow moderator know about sock puppet accounts?

How do they trap the user?

I am not going to answer this directly, for reasons that should be obvious.

However; this isn't a "trap" - it is our attempt at enforcing reasonable behaviour; using a sock-puppet for any purpose (most commonly, but not exclusively: upvoting yourself) is unacceptable.

If you want the vote of the masses; write good questions and answers.

They have ways of finding pretty much any kind of sock puppets using their sites... 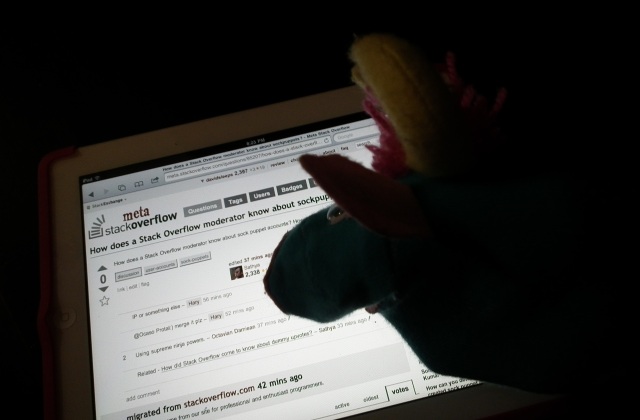 You know, throughout your posts here, you keep referring to this as a "bug" or a "trap". It's not a bug at all; it's a feature designed to prevent people from abusing the site. Which is exactly what you were doing.

In your comments on Marc's answer, you complain that your friend "Nahid" got her account merged due to suspicious behavior. If that's true, and Nahid actually exists and was playing by the rules, then what happened to her was because your behavior made her look like another one of your sock puppets.

Why did this happen? Not because of "bugs" in Stack Overflow, or the malice of the evil moderators. It happened because you abused this site so badly that everyone around you was thrown into suspicion. If you hadn't tried so hard to make your fake accounts look like real ones, your friend's real account wouldn't have looked like another of your fakes. If "Nahid" is upset that her account got merged, she should be blaming you for that. If you're upset that you lost reputation, you should blame yourself. You cheated. You got caught cheating. That's your fault, not Stack Overflow's.

You've suggested that SO might lose users due to features like this, but I think it'll gain users when they see that their reputation means something. People don't like being taken advantage of by others who don't play by the rules, and they don't like cheaters filling up their community space with garbage. Even in your imaginary "99 lost professional users" scenario, I suspect the number we'll gain far outweighs the number we'll lose due to accidental merges.

To sum up, the solution isn't to ask how to cheat more effectively, and it's also not to blame others for noticing. The solution is to improve your behavior, start playing by the rules, and try to be valuable to the rest of this community.

Actions speak louder than IP address… Possibly even a “view” of a question is an action.

Not the answer you're looking for? Browse other questions tagged discussion user-accounts sock-puppets .

18
How can you detect if users have created sock puppet accounts?
10
Is it possible to "cheat" on SE sites?
-3
How did Stack Overflow come to know about dummy upvotes?
-15
How do I delete my account and associated posts on a specific site?