First of all, I'm AWARE of this question but its answer doesn't answer mine.

In the mentioned question it states that in order to check if a flag is valid, the question has probably been locked, deleted, migrated, etc.

But it also states:

However, there have been some interesting flagging issues of late. I think we should have a clear "Flag dismissed as _" comment on each flag.

In my flagging history I see this:

I'm sure that both flags can't be invalid. Because I have 2 invalid flags and I know one invalid flag which isn't one of the 2 in the picture. So there is a possibility that one of 2 flags is invalid. How can I tell which one?

From all my flags I don't really know exactly which ones were invalid and I have no idea at all what was disputed. It is hard to keep track of it.

I think a feature like this can help us to understand how to flag more properly. 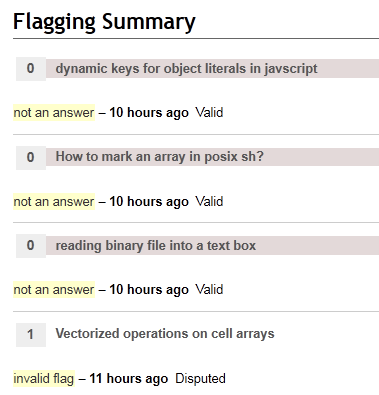 Now we can clearly see each flag and it tells:

Not the answer you're looking for? Browse other questions tagged feature-request status-completed flags flag-history .

20
How can I know **which** of my flags were marked as invalid?
10
May I have a list of just my declined flags?

142
Dismiss flags on the same posts with different validities
218
Allow flagging a comment after upvoting it
167
Add escalation system to chat flags
1229
Don't throw away all votes when a user is deleted
389
The robo-approvers are killing my will to review edits
193
Allow moderators to reply to a flag
298
Add optional box for spam flags letting you say why you think it's spam
413
Can a machine be taught to flag spam automatically?