When I try to resize the input box, I get overlap by the Similar Questions box. Obviously this isn't very useful.

Maybe a way to disable it automagically when I resize or finding a new geometry for it? 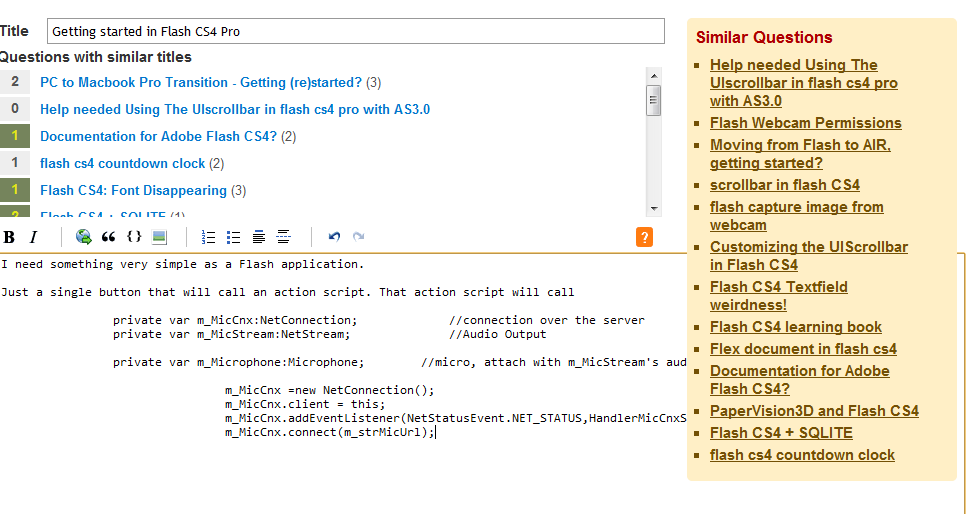 +1. I don't think there is a reason why the edit box can have an opaque background and a higher (if not the highest) z-index.

Also, people who don't format their code so that the horizontal scrollbar isn't needed should be punched in the face.

To my knowledge, this is exclusively a browser 'feature': I'll assume you're using Chrome?

Regardless, this is not a bug with any particular bearing on SO, it is a bigger issue than that. I'd perhaps recommend researching into this topic in an area where there is an active community, or support for your specific browser.

This is now status-completed, sort of, but not in the way you wanted. There's a good reason that the standard defaults resizing to be turned off; unfortunately, some browsers ignore this. Vertical resizing of the editor is okay, but that's already possible via the TextAreaResizer plugin which works in all browsers. As far as horizontal resizing goes, I agree with Andy E.'s comments on your question.

For freely resizable text areas to be considered supported, everything else has to take this possibility into consideration. But when we say we want the editor to have a width of 660 pixels, we mean it, since the rest of the page is styled under that assumption.

The fact that both Firefox and Chrome default this to "on" for text areas is wrong and thus broken. So textarea { resize: none } is now part of the CSS reset.

Not the answer you're looking for? Browse other questions tagged feature-request status-completed editor .

1222
Encouraging people to explain downvotes
863
Allow an edit to notify downvoters: "I think I've fixed the issue now - please check"
246
Can we prevent some of the low-quality questions from entering our system?
446
Reward finding duplicate questions - +10, +2, -5
385
Send authors an inbox message if their question is closed
1248
Don't throw away all votes when a user is deleted
224
Link up the excellent search engine that gives "Questions that may already have an answer" with the search box
363
New three-tiered badge idea: Explainer →Refiner → Illuminator
580
We're switching to CommonMark