Can we try to dissuade some bad migrations by adding the "first rule" to the dialog?

Can we get what Jeff has referred to as the "first rule" or "golden rule" of migrations on quite a few occasions - namely "Don't. Migrate. Crap." - added to the off-topic / migration dialog?

It could even be sugar-coated with nice words if necessary.

Migrating users don't receive a lot of guidance on how to manage migrations unless they look for it, so we should be providing that sort of information to them when they perform a migration.

I'm basically stealing ChrisF's commented suggestion from one of Jeff's answers. It's something I'd quite like to see implemented, and I thought to bring it to the wider stage. First, here's the comment:

Can we get "Never migrate crap" (or similar) added to the migrate dialog? I know most people won't read it, but at least if it's there we can point to it as visible documentation of this rule. And if it stops a few people posting that first migrate vote then it will be worth it.

Now, ChrisF obviously makes a very good point that many people won't read it, but at least then we can point them at the UI and say "look, you're not paying attention, please don't do this again," and hopefully at least then stop some repeat offenders.

Low quality and zero-effort questions that get migrated seem to be (based purely on observation, and with no real evidence) much more likely to just sit on their target site abandoned (that is, with no owning user account)—even if they are strictly on-topic on the target site—because often the person who has posted it really doesn't care all that much.

Migrating users don't receive a lot of guidance on how, what or where they should migrate, unless they go looking for it on [MSO] or the privilege pages, which we can only expect a small proportion to do. As such the only real opportunity to educate these users about the migration system is when they are performing a migration, it's the only time they'll be paying attention and be interested in migration, so a few guidelines or rules (but not so many as to put people off) subtly mentioned during the migration process could help guide these people and improve the quality of migrations.

I generally ask on chat on the site I might vote to migrate to about questions I'm not sure on. That has the advantage that even if someone's not around immediately to discuss it you get an alert in the inbox when they do (provided they say your name) so questions don't get "lost".

You could "encourage" people to not migrate low quality questions by adding some kind of rep based incentives, e.g. if on the receiving site a question you voted to migrate gets 10 up votes you get 1 rep, if it gets 10 down votes or closed completely you lose 1 rep. That would certainly force people to think before voting to migrate every off-topic poorly asked question to one of the other sites. Effectively it's making a wager on the quality of the question you want to see moved.

Of course you'd need to handle the cases where one person votes plain off-topic and four vote to migrate so the migration still happens.

Alternatively voting to migrate could require more than a certain amount of rep on the site you vote migrate to, even if it's low (e.g. 500) would still indicate a minimum level of knowledge on the receiving site.

How about also moving the "off topic" close reason to the bottom so its the last option on the close dialog - if you can find another reason to close the question then you should use that one instead.

While we are on the subject of this dialog why not also add a subtle link to the faq for each site as well: 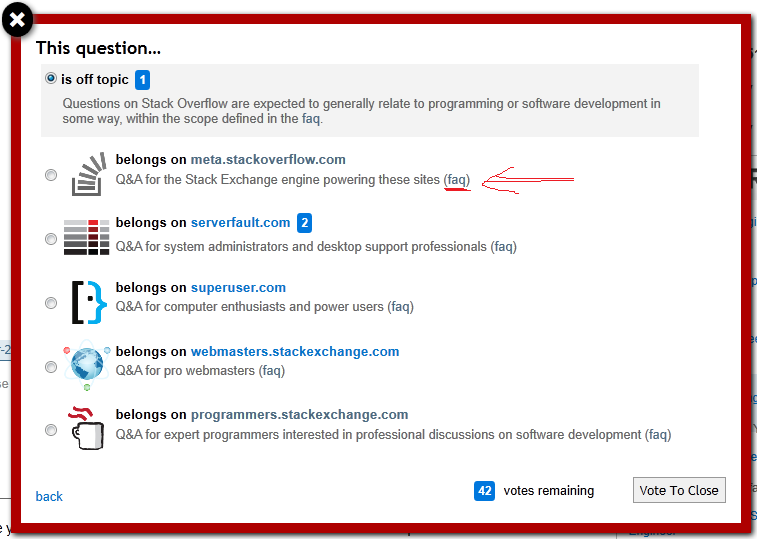 The faq contains the definition for what questions are and aren't suitable for. I'm not a regular user of any of the other sites and so every now and then I find myself refering to the faqs - having a link to it on this dialog would be a subtle reminder that its your responsibility to check the question is stuiable before voting to migrate.

Update: Perhaps a link text of "is this question suitable?" instead of just "faq" would be better, although it is a tad lengthy.

The close-vote privilege page doesn't even mention migration. It should! And it should say something like the following:

Secondly, I like Will's idea; there should be a clickthrough when you vote for a migration. I am partial to his wording — "Are you sure this isn't crap, because if you migrate crap we're going to punch you through the intertubes" — but again that should probably be nicerated1.

nhinkle's rumor of an improved migration system is nice to think about, but I agree with others that one of the more simple options should be done now. I have one thought on how it could be improved, however. Currently not even mods can migrate a question if said question is closed (presumably because closed questions are crap). This implies that closing and migrating are separate actions, and thus I propose that we actually separate them. Voting to migrate should be separate from voting to close.

1nicerate, v: to make nice. "We should nicerate that crabby woman."

Not the answer you're looking for? Browse other questions tagged discussion feature-request user-interface migration .

42
Please don't migrate low-quality questions to other sites
15
Why was this question closed as off-topic without being migrated?
116
Add a "don't migrate crap" migration 'path' to all sites
60
Require minimum reputation on the target site for migration
15
Please just close garbage questions, instead of moving them to Programmers SE
18
What's the deal with migrating CSS questions to Webmasters?
31
Add review queue for recent migrations
2
Allow moderator migration of old questions between non-trilogy sites

258
Reset votes on migrated questions
56
Provide direct feedback for rejected migrations
1250
Don't throw away all votes when a user is deleted
540
The current review system encourages fake reviews; some people upvote everything rather than actually fixing problems
116
Add a "don't migrate crap" migration 'path' to all sites
728
Your answer is in another castle: when is an answer not an answer?
182
A proposed philosophy of question migration
582
We're switching to CommonMark
755
New Feature: Table Support