This question was inspired by, and is kind of a corollary to, Could the star on favorited questions change in color?

"Important numbers" are usually displayed prominently on Stack Exchange sites. They include question scores (number of upvotes minus number of downvotes), answer scores, the number of users who have marked a question as a favorite, user reputation and comment scores. Most of those numbers are always displayed in the same color; comment scores are the exception. 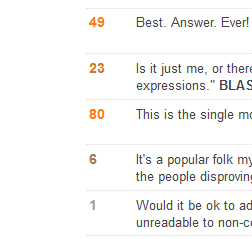 As illustrated by the screen clip above, the more votes a comment has received, the brighter its score is. (The 1 is gray; the 6 is dark brown; the 23 is light brown; and the higher numbers are orange.)

(Edit: it's now 2014, there are a lot more sites and the score/brightness correlation rule is no longer necessarily true. Screenshot from Meta Stack Exchange, this year:

Why is this system used only for comments? Should color-coding be expanded? Removed?

It is based on the number of votes. the darker the shade of orange, the higher the vote count.

This is for you to easily distinguish which comments might be more useful to read.

It doesn't make any sense to do this with answers since they are so far apart, but the comments are in very close proximity to one another so you need an easy way to eyeball them

Not the answer you're looking for? Browse other questions tagged discussion user-interface design .

48
Color kvotes differently (like kviews)
7
Could the star on favorited questions change in color?
10
How is the color for the upvote count on comments calculated?

199
What's with all the rude comments recently?
14
Comment Analysis from latest data dump
39
Review contrast of regular vs favorite color for various Stack Exchange sites
119
What's up with the new CSS?
2254
Firing mods and forced relicensing: is Stack Exchange still interested in cooperating with the community?