The flagged posts tool is frequently cluttered with Not an answer or Low quality flags on questions and answers from 2008 and 2009; I've recently counted 17 and 13 such flagged questions or answers out of the 50 randomly shown.

Stack Overflow is not the site it used to be; it doesn't seem productive to me to try to hold ancient posts to standards that did not yet exist. Some old answers should have been comments, but -- I think -- were made before comments were implemented.

So I propose adding a polite unicorn when a user flags an old post: 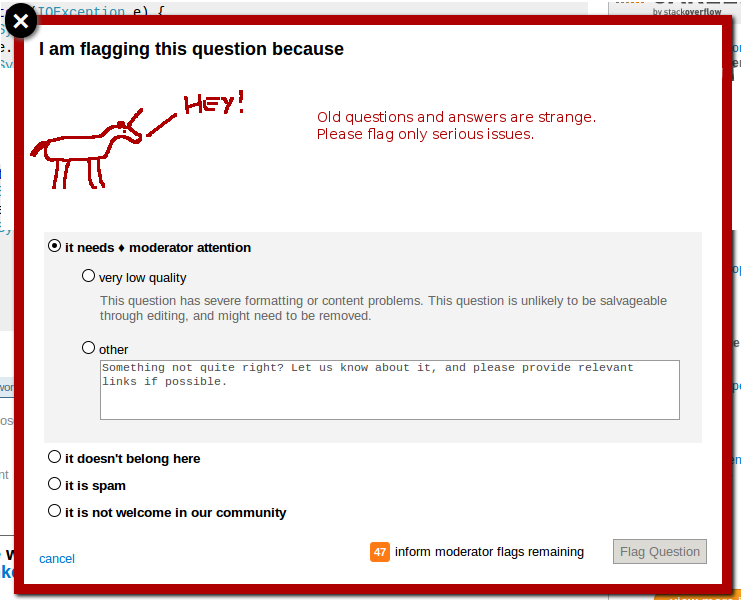 GEOCHET's answer is definitely lacking in description, but a -1 would probably do better than flagging.

These answers, and two more, (since deleted by Robert) might have been wrong, but they were at least suggesting libraries. 2D-only, rather than the 3D that the questioner requested. That's why they had negative votes. But they weren't comments. They weren't requests for more information. They were just wrong.

Incidentally, the question is a poll. Today we'd close and delete the entire question. But in 2009, it got 11 answers -- and remains open today.

Duplicate: "Adding" Dictionaries in Python? was marked as a duplicate of python dict.add_by_value(dict_2)?.

I don't think I'd ever recommend marking a question as a duplicate of a code-golf question. (Which we mostly throw over the fence these days.) But the code golf question got 8 answers back in 2009, and it remains open today.

Those old questions and answers might not be perfection by today's standards. But they've been picked over quite a bit already and I think we've reached the point of diminishing returns. Our flagging and pruning efforts would probably be better spent on the contents generated in the last week.

I disagree. Broken windows shouldn't be allowed to remain just because they happened before a certain cutoff date.

I often run queries to find questions asked in answers. Such a query doesn't care when the "answer" was given, so why should I prevent myself from flagging obvious non-answers that should be removed? If a comment was given in an answer before comments existed, I can flag it for a moderator to convert that to an actual comment. "Thanks", "me too", and questions in answers don't belong, and should be removed in almost every case.

Just because a question was asked and answered a while ago doesn't mean that Google stopped returning it as a search result after that time. People keep reading older questions, so we should make sure that they are just as clean as more recent ones. Not only does this increase the signal to noise ratio, but it also helps to encourage people not to use Stack Overflow like a traditional forum.

Admittedly, the non-answer examples you provide aren't the best uses for flags. I use downvotes for attempts at answers that don't really address the question asked, and reserve flags for true non-answers.

We've been deleting large portions of the old original content now for quite some time. I don't think mass deletions are in order, but if someone finds a specific post that no longer meets the guidelines and flags it, what's wrong with addressing that problem?

I don't think people are not flagging the recent content because they're spending all their time flagging the old content. And I don't think people who clean out flags are only processing the flags for the old content and ignoring the new content. And remember that flags are sorted in random order, meaning that we get as many eyes on as many different flags as possible. So where's the harm?

A lot of people want to hold onto the old content; that's a sentiment that's been discussed and refuted over and over on Meta. I'm more of the neutral opinion that we should only prune the old content that is actually problematic, the stuff that obviously fails to meet our current guidelines. Flags are an effective way to identify those problem posts.

It's unclear why we should add this complexity to the flag system. From the early days, we've had quite a bit of difficulty encouraging people to use their flags. Now you expect them to figure out when the flags are appropriate and where the rules should be applied? I can't imagine that's going to help matters...

Not the answer you're looking for? Browse other questions tagged feature-request flags old-questions .

10
Should I flag old questions?
123
Community-led deletionism: a protocol for sanity
132
What are the best ways to find answers that should be flagged or edited?
-3
Meta voting prevents evolution of the site
21
Community ♦ should discriminate more when bumping unanswered questions
7
Cool down on flagging posts in the pre-comment feature era?
11
What to do if you see misuse of something in a post, but it's extremely old?
10
Should I flag old not-an-answers?
7
Should I flag ancient questions that need closing / migrating?
-9
Show subtitles/synopsis text with a fall back to the excerpt on question previews
see more linked questions…

890
Show all of my question/answers to me even if they are deleted
252
Reset votes on migrated questions
338
Send authors an inbox message if their question is put on hold
214
Allow flagging a comment after upvoting it
410
Decision on rejected edits should be displayed as a notification to the editor
376
Add an “I don't understand” option for review audits
425
Should Stack Exchange in general be awarding “A”s for Effort?
293
Add optional box for spam flags letting you say why you think it's spam
403
Can a machine be taught to flag spam automatically?