Rightmost tags in Favorite Tags are cut-off on the right 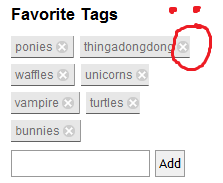 I'm fairly confident that this is a render bug in Chrome, which appears to be caused by the fact that the line wrap occurs at the end of an inline element that contains an inline-block element on its outermost edge.

It's also possible that this is a defined behaviour somewhere in the CSS3 specification since this issue only started appearing recently, but I haven't had time to check. It seems like rather undesirable behaviour though, so I'm still leaning towards bug.

That being said, it's fixable with a bit of a hack and without having to overhaul all of the CSS that's in play there. Since the edge is displayed so long as there's inline content at the end of the tag <a>, it's possible to just give it some:

Injecting a zero-width space counts for the purposes of rendering, but doesn't impact the expected display, nor does it interfere with the tag handling JavaScript.

I was hoping the Chrome team would fix this weird bug, but it doesn't look like they will. We have deployed the fix Tim Stone suggested. It will be in the next production build.

I can see a similar effect in FF5.

But I blame the browser, probably the zoom factor.

Ah, I created duplicate here, but with the solution, so I'd move it there:

In Opera the tags on the second line and further don't have padding at the start, in Webkit there are no right padding and border on all lines except the last.

To fix it you can change the display of tags from inline to inline-block (and change some other style according to it).

There is a jsfiddle with the current and fixed variants: http://jsfiddle.net/kizu/EaveS/

So, to fix it you must replace the following lines in the selector for the tags:

Not the answer you're looking for? Browse other questions tagged bug status-completed favorite-tags design google-chrome .

1
Rendering bugs with tags in sidebar
0
favourite tag doesn't show the border-right for the last tag of the line
24
Has a consensus been reached on whether or not some questions are too simple?
5
Minor css issues with ignored tags
13
Elements on right side are cut-off
4
Spurious character in favorite tags

1174
Encouraging people to explain downvotes
487
What HTML tags are allowed on Stack Exchange sites?
312
Tab for questions that are labeled with favorite tags
415
Decision on rejected edits should be displayed as a notification to the editor
99
Moderator diamond is too large relative to other text on Android
10
Image on “Page Not Found”-page was misaligned