Why are there so many downvoted posts the morning of July 19th 2011 on Stack Overflow?

I hope this is the right place for this:

I am browsing Stack Overflow and I keep seeing a lot of -1 votes, on all kinds of stuff, even if I've upvoted it in the past. Something that was 0 is now already -1 (and they're good answers).

Is there something going on that I don't know about?

EDIT: I guess seeing the splits would have helped a lot, kinda odd that you have to hit 1000 to see that, I'm sure there is a reason. I'm sorry I wasn't able to respond earlier, being at work kind of does that. I wish I would have included the original link and then I could have had someone else take a look.

Is there something going on that I don't know about?

Yes, someone else came along after you and downvoted them!

Obviously they didn't agree that they were "good" answers. Although it's worth reiterating that there are lots of possible reasons that someone could downvote a post. We intentionally have no way of policing that beyond blatant abuses of the system like serially downvoting a particular user.

When you reach 1,000 reputation on Stack Overflow, you'll be able to view vote splits, which can tell you how many people have cast up and down votes, respectively, on a particular post. That way, you'll know that your +1 (or -1) is still there, but that someone else came along and cast a competing vote. 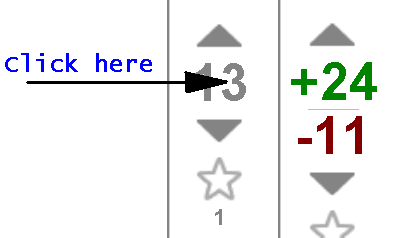 This helps to explain why you'll occasionally see posts that have a total vote count of "0", but actually have been up or downvoted numerous times in various ways by different users.

Unfortunately, it's not a conspiracy or a major bug in the system. It's just not in the cards to have that much fun this week, I'm afraid.

In response to your edit:

I guess seeing the splits would have helped a lot, kinda odd that you have to hit 1000 to see that, I'm sure there is a reason.

The reason we've been given why you have to hit 1000 rep to see the vote splits is because gathering this information from the database is relatively expensive. That's also why it takes an extra click, instead of just having this information available by default. Although Jeff has also admitted this privilege is set to 1000 rep just so that there'd be something to give people upon hitting that level. Not too hard to attain, though, with a little time and dedication.

And seeing the original link is definitely helpful to provide context. Clicking on the vote split, I currently see +2 / -1. So at least one other person agreed with your assessment that this answer was helpful/useful. Upvotes are worth +10 points to the poster; downvotes only cost them -2. So the post score can be a little deceptive with regards to the overall rep that they've net.

I personally wouldn't have upvoted this answer, though. (Probably wouldn't have downvoted it either, but it would depend on its current score.) Why? Because it's not particularly useful. I'm not fond of encouraging answers that provide merely snippets of code without any explanation. Those don't teach or inform the asker. Code snippets are useful, but they need to be combined with some explanation of why the code works. You need to answer implicit questions like, "What does that code mean?", "Why do I need to do that?", "Why have you written it that way?", etc.

I often leave comments to this end, asking people to flesh out their answers. They usually assume I'm stupid and just "don't get it", but that's okay. Someone out there who will be reading their answer won't "get it", so it might as well be me.

Not the answer you're looking for? Browse other questions tagged support down-votes .

97
Why is it a privilege to view vote counts?
32
Why do vote-counts require 1,000 reputation to see?

743
Which tools and technologies are used to build the Stack Exchange Network?
16
How many moderators are there on Stack Overflow?
64
Make links in downvoted posts be grey, just like the text
31
If I downvote every competing answer, will I get flagged for vote abuse?
113
“STOP! Look and Listen” audit tricked me
17
Should I delete posts that are downvoted?
1056
Why is Stack Overflow trying to start audio?
29
How many posts are downvoted without a comment?