Add a “more” link to the Close as Off Topic window so we can migrate to *all* Stack Exchange sites.* [duplicate]

I decided this question was off topic, so I voted to close. The problem is that I closed it as off topic and I thought it would be better suited on English Language & Usage.

However, I couldn't choose that (English Language & Usage) in the pop-up. 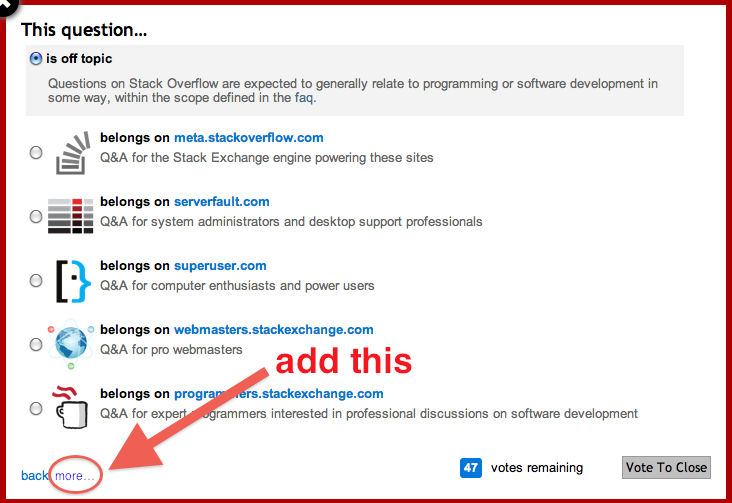 I think there should be a "more" link in the bottom of the pop-up when someone wants to close a question as off-topic so it could be migrated to a site not already listed. If a site in the "more" section would already have a vote to get the question migrated to there, it would be listed without the need to click "more".

Is there a reason this is not yet implemented?

Related: Will it be possible to migrate questions between the trilogy and the Stack Exchange 2.0 sites?

It's very rare that a question on Stack Overflow needs to be migrated to English.SE. It's even more rare that it'd need to be migrated to something like Cooking.SE or Gardening.SE. Having users choose from all possible SE sites doesn't make sense, since most of those sites would never see a migration.

In addition to that, it's unreasonable to expect every user with the "vote to close" privilege to be familiar with the scope of every other Stack Exchange site. Limiting the number of migration paths allows the most common migrations to happen without moderator intervention and even then we sometimes see "bad" community-driven migrations.

If you see a question that needs to be migrated to a site that doesn't have a default migration path, flag the question for moderator attention instead of voting to close. If the question belongs on the suggested destination, a moderator will move it.

Not the answer you're looking for? Browse other questions tagged feature-request migration .

31
Will it be possible to migrate questions between the trilogy and the Stack Exchange 2.0 sites?
59
When voting to migrate an off-topic question, why is the list of sites limited?
253
Reset votes on migrated questions
123
Can we make the title of duplicate questions say “duplicate”?
1170
Don't throw away all votes when a user is deleted
97
Add “Flag as Other” checkbox to “Vote to Close as Off-Topic” dialog
280
Build and strengthen the Stack Exchange community with “crossover questions” between sites
111
Add a “don't migrate crap” migration 'path' to all sites
178
A proposed philosophy of question migration