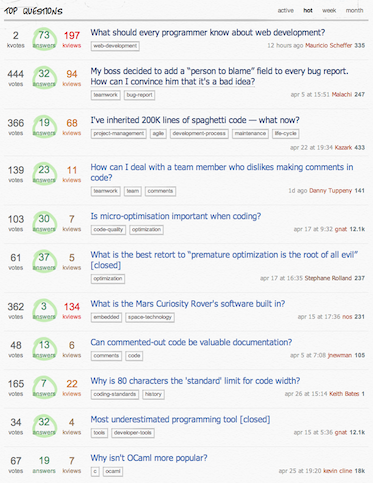 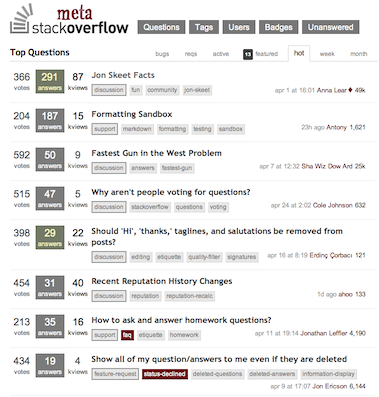 27
Impose strict time-limit for questions on Hot Network Questions list
208
What formula should be used to determine "hot" questions?
127
Feedback request: New top bar and MultiCollider redesign
105
Dealing with "Find out who's going to buy the croissants"
95
Filtering "hot" questions
51
The association bonus should not enable users to vote on every site
59
Trolls in our Halls
71
In “network hot” questions formula, discard answers when voting evidence indicates that these are not good data points
52
Lots of not-always-useful but well-intentioned answers
30
"Closed by" is incorrect
See more linked questions

993
Show all of my question/answers to me even if they are deleted
208
What formula should be used to determine "hot" questions?
119
What are the criteria for questions to be selected for Hot Network Questions?
1251
Don't throw away all votes when a user is deleted
547
How to avoid "Hot Network Questions" on the sidebar
117
At smaller sites, penalize hot questions having 3-4 close votes
156
Prevent questions on the Hot List from being upvoted by casual visitors (only rep is from association bonus)
381
Updating the Hot Network Questions List - now with a bit more network and a little less "hotness"!
720
Dear Stack Exchange: a statement and a letter from your moderators