I came here from StackOverflow expecting the same great community.

I have made a sincere effort to participate and witnessed nothing but arrogance.

I'm not just talking about reactions to my own questions, but this one stands as a good example. People don't have to agree with the suggestion, but without having been rude or destructive, I'm blocked from posting. This is what's referred-to in Israel as a "proportionate response."

Enjoy yourselves, I'll make myself useful elsewhere. I no longer care about meta.

So I got into a discussion with someone about editing this crappy question and naturally this issue has been discussed before.

I started wondering: is it worth striving for some kind of consistent response from the community? To have a policy for sheparding these lost souls? I'm starting to think that having some distinctive way to flag this particular problem might be useful.

So, how about having a little 16x16 icon of a mud splat or something similar next to someone's user name if more than, say, 30% of that user's most recent questions have been edited by somebody ( or can otherwise be measured to be ugly/childish).

Perhaps when editing someone's question there could be a "[x]This user isn't making an effort to express himself" checkbox to distinguish these edits from other, more benign changes.

It could also appear next to questions that have been edited since the user viewed it -- a signal that it might be worth re-reading and answering.

I expect that this would also cut down on artificially high downvoting on a badly-written question which is otherwise perfectly valid, and reduce the number of unfriendly responses (which bring down the tone of the whole site).

It's automatic and impersonal, removes itself as the offender improves, and has curiosity value: the user will be tempted to click on it and there would be an explanation, perhaps with a couple of their offending questions shown side-by-side in before-and-after fashion.

Another option, threaten the user with closing the question.

Moderators will close this question if you do not make an effort to express it clearly.

feature-request status-declined edits new-users
share|improve this question
edited May 23 '17 at 12:35

So, how about having a little 16x16 icon of a mud splat or something similar next to someone's user name if more than, say, 30% of that user's most recent questions have been edited by somebody (or are crappy in some other measurable way).

How about this, instead:

Seems to qualify as "something...next to someone's user name if more than, say, 30% of that user's most recent questions...are crappy in some other measurable way".

For when that's not enough, we also have this: 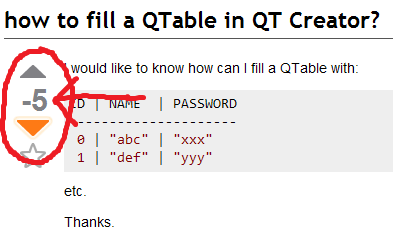 We don't really need anything else. If a question is salvageable through editing, and you didn't make those edits, then you're really just as much to blame for the declining quality of the site as the person who originally posted it. At least they might not have known or been able to do any better.

I reject at least one of your assertions:

Can they? Sure. But I wouldn't say it's true 100% of the time or even a vast majority of the time.

There are perfectly valid reasons for a good, contributing user to consistently require edits to their posts. Perhaps English isn't their strong suit. Perhaps they're disabled and the utilities they use to post sometimes result in less-than-perfect posts which regularly require edits. So I don't think it's appropriate to brand someone as "frequently needs edits" as a mark of shame because I don't think it necessarily always is.

So, how about having a little 16x16 icon of a mud splat or something similar next to someone's user name if more than, say, 30% of that user's most recent questions have been edited by somebody (or are crappy in some other measurable way).

The bolded part of your feature request is already implemented. A user's reputation is displayed with their posts. That is the measurable way to tell if their contributions have been crappy.

While I can understand the frustration, this isn't something I'd like to see. Some people (sometimes including myself) will make edits for niggling little typos that the OP missed, but don't really make the question impossible to understand (e.g. fixing an incorrect "your" which should be "you're"). Also, something like this could lead to undesirable behavior - e.g. "revenge edits" to SPLAT someone and make them look bad.

It seems like the information that your "splat" would be conveying is already readily available. If I have a suspicion a user has a poor track record, I can just click on their username and get a good idea of their history. I can also track the edits on a post via the Edited link at the bottom.

I won't touch the downvoting issue because that has been done to death. If you mess with people's ability to downvote, it becomes impossible to gauge how the community feels. Just like an actual election, there are going to be trends, there are going to be people taking out their frustration, and there are going to be people voting for Sesame Street characters. Overall, though, the process is successful. I think (and this holds for the commenting and the editing) that you can micromanage the moment-to-moment operations of the site and create an environment that isn't as fun or conducive to helping people.

IMHO, this wasn't worth the edits/rewrites. The original was next to meaningless, and the final product (which still sucks) bore almost no resemblance to the original.

That being said, the real difference between your proposal and the current practice is whether or not we consider the user's history when evaluating their posts. What we do now is take everything on a question-by-question basis: Questions are closed if they suck, and the only persistent penalty is the downvotes. You're talking about getting to know the user's past submissions, with escalating penalties for failure to improve.

I don't think this is such a great idea -- partly because it's highly subjective, and partly because SO works very well when questions are evaluated on their own merits. The reaction to a question should reflect only its quality, not who posted it; anything else becomes unfair to everyone involved. If you post a crappy question, I don't care that it's marginally better than your last twelve. I'm going to downvote or edit it, not waste my time picking through your history.

Likewise, if Jon Skeet switches to decaf one day and posts an answer that's just awesome instead of super awesome, we shouldn't downvote it just because he isn't improving. I realize that's not quite what you're proposing, but it's a logical consequence of evaluating the user instead of the post. Once we open the door to that, SO takes another step toward becoming a popularity contest, and downvotes take one more step toward meaning "I hate you" instead of "your question needs work."

What should really happen to questions like this is getting closed as "Not A Real Question." This is much worse than downvotes if you're struggling with a problem. Annoying users might not care about reputation, but failing to get an answer is enough of a penalty to make people try harder, especially if they really needed help with something. If they don't improve, they won't get help, and they'll leave us alone eventually. Problem solved.

Not the answer you're looking for? Browse other questions tagged feature-request status-declined edits new-users .

215
What can I do when getting “We are no longer accepting questions/answers from this account”?
7
What should we do with users that have been around for a while, and still don't ask questions correctly?

792
Allow an edit to notify downvoters: “I think I've fixed the issue now - please check”
1754
Could we please be a bit nicer to new users?
156
How should a user's death be handled?
239
Can we prevent some of the low-quality questions from entering our system?
410
Decision on rejected edits should be displayed as a notification to the editor
1161
Don't throw away all votes when a user is deleted
342
Reject an already-approved suggested edit when rolling it back
376
Add an “I don't understand” option for review audits
117
Pre-fill question-box with text for new users (A/B study proposal)
163
Usability issues for first-time Stack Exchange users - a micro-study