What does the distribution of reputation in SO say about SO-users?

Reputation on SO has been highly discussed. I have been curious how the reputation is distributed. A first glimpse on the userlist resulted in the hypothesis, that reputation is degrading following a power-law to the (reputation-order) rank of the user. This distribution would support the theory expressed by the question whether "High Reputation Attracts Too Many 'Up-Votes'?"

I did some data gathering (privacy aware, not storing any user identifiers, mind you) and got the following graph: 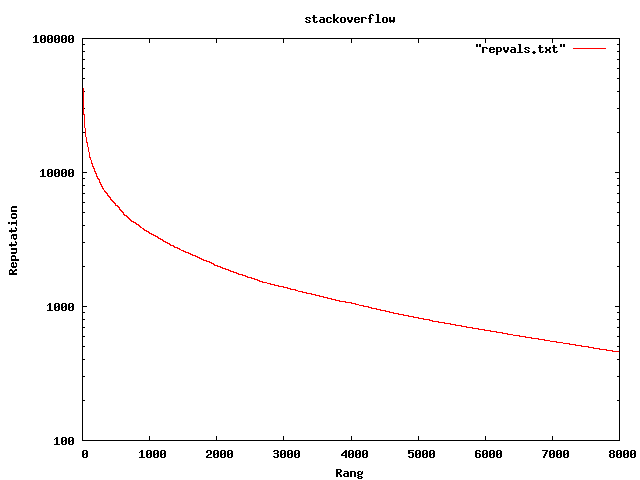 On the x-axis you find the rank of the user, starting with 0 (Dijkstra-conform). On the y-axis the reputation value is shown in logarithmic scale. By "rank" I denote the ordinal numbers of the userlist ordered by reputation (order as done by SO)

I am not too good with evaluating data, but that degradation follows something stronger than 1/(a^x) seems quite obvious to me.

What does this say about SO-users? Are we stacking positive votes on top of those who already have a high reputation? Are we 'follow the leader'-types? Do we need more data?

I accept that I fall into the "high rep" bracket, so I hope that doesn't sound egotistical. But when I vote, I'm voting for the quality of that question/answer, not the user. If a new user posts a good answer, I'll vote for it.

I've done a couple of related blog posts with my own graphs based on the data dumps which you might want to have a look at:

Two interesting and relevant graphs from those blog posts: 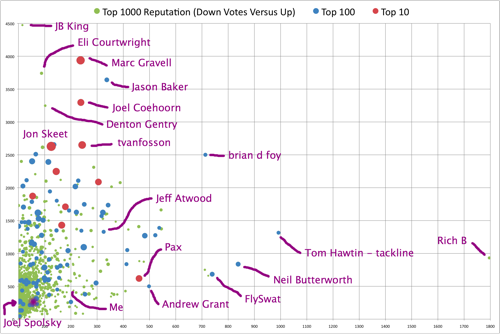 "Privacy?" Yea, right. We are posting to a Collective Commons lic'd site with public data dumps. The SO team has sanitized to the point where if a users wants to remain anonymous they can. If a users doesn't care, then that is that. Remember, real names and other identifying information is not required/displayed. Accounts are not even a requirement.

In the blog posts are more interesting statistics and graphs, including stuff on specific users.

Not the answer you're looking for? Browse other questions tagged reputation users behavior discussion .

94
The problem with reputation: does high reputation attract too many upvotes?
27
Can we view the reputation distribution?