Come Take a Look at our New Contributor Indicator!

This feature is now live across the network.

We've been doing quite a bit of research into ways that we could help new users have better experiences that ultimately lead them to becoming increasingly valuable, long-term contributors to our sites. While this is still ongoing, it's starting to blossom in the form of small but hopefully very effective changes we can make to improve how well we retain great people.

tl;dr;: Folks will see an indicator when they go to interact with new contributors (visible for a week following their first post) letting them know that the person is new. A handy link to our Code of Conduct will be in the notification for reference.

###What are our goals with this?

We actively discourage folks from providing information that isn't really relevant to their posts; we would rather folks just get down to business. That's fine, but it doesn't really solve for how apprehensive people feel when contributing to a new community (especially one that's notorious for having lots of rules).

We tend to edit out ways that people try to anticipate and address criticism in advance (stop me if you've heard this one!):

I'm really new at this, so please forgive me if I'm doing this incorrectly ...

Sometimes, people say this because they're new at two skills: whatever they're trying to accomplish and (in many cases) asking questions on our sites. Sometimes, they're experienced in endeavor, they're just new to our engine. The need for a little empathy is the same however, and equally applicable in either case. We agree that this sort of stuff doesn't belong in posts, but we feel like the system should embrace it.

This indicator can speak for new contributors in a friendly way that the system itself reinforces; we hope it will allow folks to feel less apprehensive about jumping in.

If you're thinking something along the lines of 'Student Driver', the analogy generally fits: black-and-yellow striped tape and everything.

Well, it's not going to be black-and-yellow striped tape, even thought that would be pretty neat. It's easier to just show you, so I brought some screenshots! While these are still being finalized and tweaked, here's what the indicator will look like when you:

Note: the new indicator doesn't actually attach to the user card throughout the site; it only appears where the user card is displayed on posts. This is what happens if you mouse over the indicator: 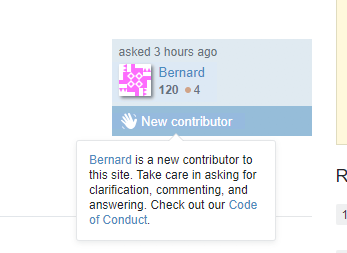 Or, write an answer to their initial questions: 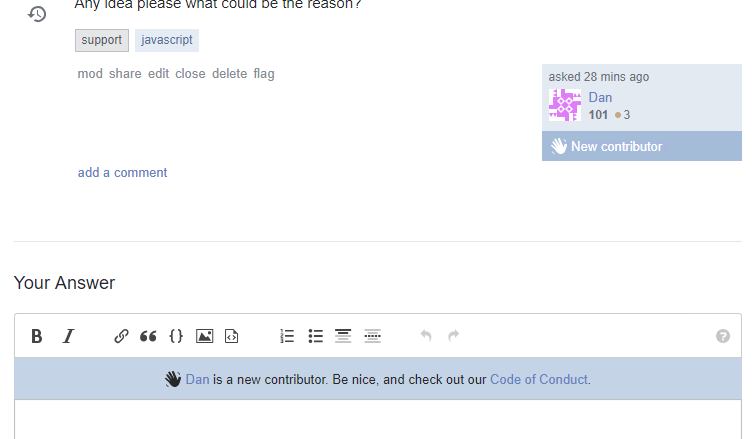 .. and the indicator under the user card on answers behaves just like it does in the question view example.

These are the most common pain points when it comes to engaging with new contributors.

It's a reminder that how you interact with the person could be extra meaningful (any time we help strangers just out of the love for what we do, it's meaningful). But it's not a magic shield of any kind, it doesn't work like spawn protection (where players can't take damage for the first few seconds after entering) in video games.

###The new indicator works by the age of a user's first visible post.

This could be a question or answer, and the association bonus won't influence the behavior. While you might not be new to our engine, everyone is new when they first join a new community, so the indicator is shown.

###What behavior do we hope to encourage from more experienced users?

We hope folks will try to explain the why in addition to the what or how when you show new folks the ropes of using our system, and try to make them feel like it's within their immediate capability to be successful here. Experienced contributors don't need to know that their formatting looks good when you mention that they forgot to include a version number, but new contributors really appreciate that encouragement.

Other things you can do:

Our sites work in a way where it's nearly impossible to guide new users through complete on-boarding in a way where we can ensure that they avoid all major pitfalls. There are just too many nuances to how the system works that can't be sufficiently expressed in UX / system dialog; we need a safety net.

We like to take the least invasive approach that's likely to get the job done when it comes to guiding behavior, so we don't want to make changes to tools when a simple sign that says "Hey, those things are sharp, be careful!" would suffice.