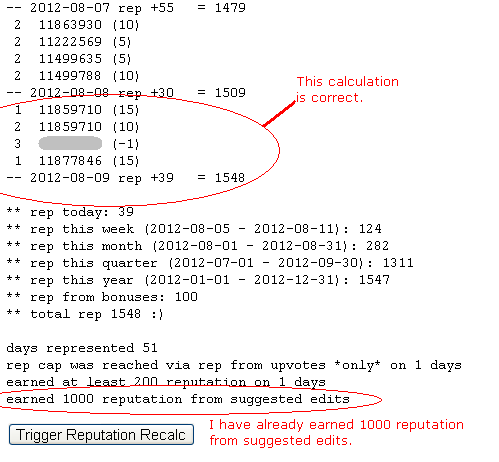 But still I am getting two reputation points for suggested edits (and that's where I suspect a bug), which will be removed one day later (that is fine). Look at this picture: 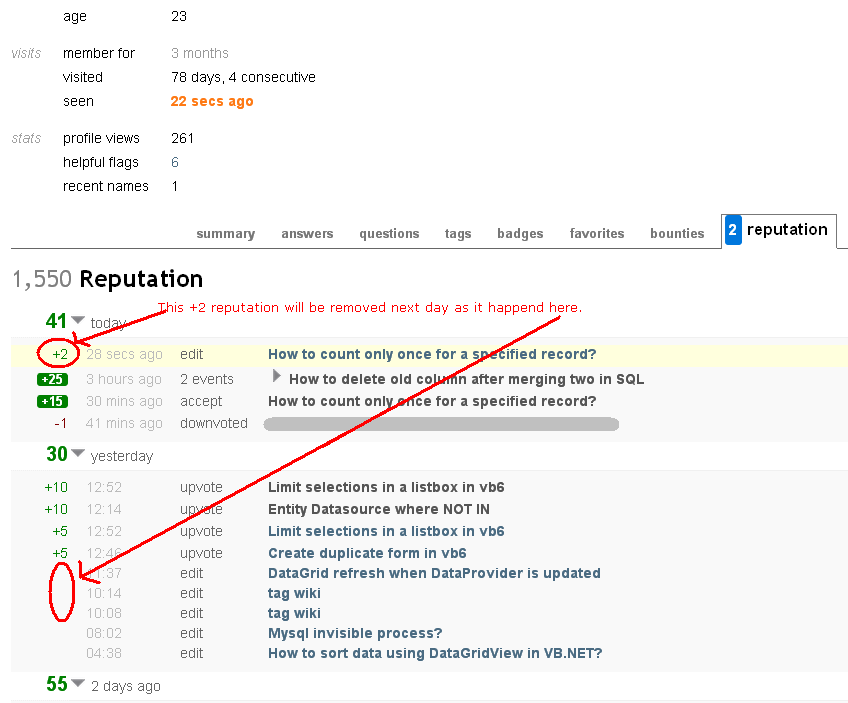 When I post an answer and delete that answer, at that time my reputation is recalculated and the actual reputation is shown (after removing the suggested edits' +2 reputation). This happened thrice.

And now I can not tell more about this issue. See my reputation.

bug status-bydesign reputation suggested-edits
share|improve this question
edited May 23 '17 at 12:36

It's bug-like (although not really a bug since you end up with the correct amount of rep), but I don't think many people see this. At 2000 rep, you can directly edit questions and answers, and so you don't get the +2's for suggesting edits anymore. The cap is at 1000 points of rep from edits. So the only people who see this will be folks with rep between 1000 and 2000 who edit like mad, but get very few points from asking or answering questions. In practice, I doubt that this comes up very often.

I have 45K and have made a boatload of edits in my day, but /reputation says I only got 18 reputation from suggested edits; looks like I hit 2000 points on my eleventh day on SO. I missed seeing this issue by a mile! I expect this is fairly typical -- it seems hard to imagine somebody making 500 edits before they get 1000 points of rep from some other source.

Not the answer you're looking for? Browse other questions tagged bug status-bydesign reputation suggested-edits .

22
Edit a question (from other user) and get +2 rep?
6
Something is going wrong with my reputation
5
Reputation mismatch on SO

276
How do suggested edits work?
52
Why is there a limit on edit reputation reward?
410
Decision on rejected edits should be displayed as a notification to the editor
9
No reputation from suggested edits
2
Does the 1000 limit for “editing” points translate into a maximum of 500 edits?
0
No rep for edits once user has edit privileges, even below 1000?
291
How do we encourage edits to obsolete/out of date answers?