Chat doesn't seem to recognize my phone as a mobile device

I'm really not sure whether this is an MSE-worthy issue, or just a Windows Phone one, but I'm hoping to provide enough details here such that it makes sense.

Pretty much just as stated in the title of this question, Stack Exchange Chat doesn't seem to recognize my phone as a mobile device, and consequently it doesn't give me a mobile experience.

I'll admit that I'm not really convinced that this is actually a Stack Exchange bug, but I'm at a loss for what else it could be, so I'm tentatively tagging this as support.

I opened Internet Explorer 11's developer tools and set the user agent to view the mobile site, and that works. Although it doesn't seem to be aware of Windows Phone 8.1 yet, at least in my version. The User-Agent for that is: 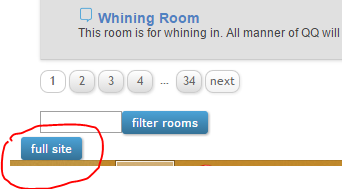 The rest is just theory since I don't have direct experience with chat on a mobile device and with switching between views.

You just need to click it once and assuming it behaves like the same buttons on the main site, your choice of views will be preserved in the future.

This could also explain your situation. If you happened to visit once before on your phone and accidentally clicked the "Full Site" button, you would have been given the full site and it has not switched back because you made the change initially.

Not the answer you're looking for? Browse other questions tagged support chat mobile-web .