I think it would be very handy to have a users 'privileges' page (what you see when you go to /help/privileges) also show the user's gold tag badge privileges. Currently it just lists the reputation-based ones, but gold tag badges carry an important privilege that should appear there.

There'd be a new tab for them, adding say gold tag to the ones for milestone, moderation, communication, and creation privilege-types, and they should appear on the default "all" tab in some form, perhaps an additional section at the top of the list (these will tend to be gained only by users who have those higher rep-privileges anyway).

I think the additional tab and the gold tag badge privileges don't need to appear at all until at least one gold tag badge has been earned, but I'm happy to leave that choice to wiser heads.

Here's a rough mock-up of the kind of thing I'd have in mind for the all-tab, but there are other ways to give the same information that might be more easily achieved. (The sidebar that explains what the privilege-classes are would presumably also need a change.) 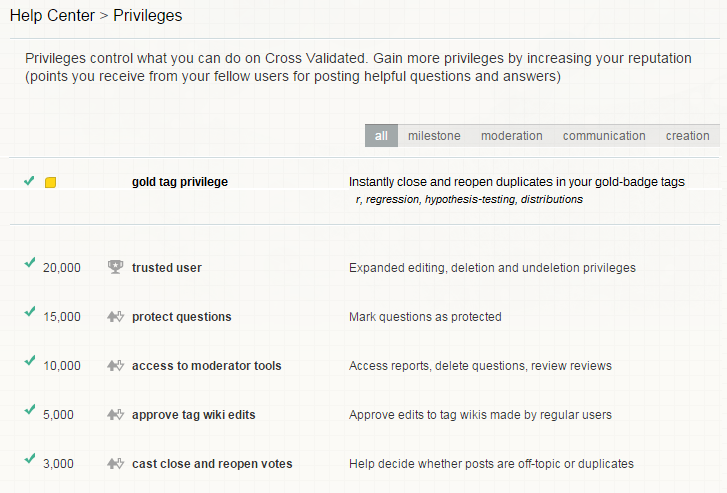 This is an edited extract of my Cross-Validated page. It would look slightly different on other sites of course. I've also made the proposed gold-tag section stand out more (it's a bit darker than it would really be in practice) -- in reality the general appearance would just be in the same style as the rest. In the above mock up I haven't shown the additional 'gold tag' tab.

Edit: In the case that it might not be feasible to list all tags for users who have very many gold tag badges, perhaps list the most popular tags, followed by "..." once the space limit is reached.

9
Can the descriptions of tag badges be updated to describe the privileges conferred by gold tag badges?

992
Show all of my question/answers to me even if they are deleted
54
Indicate the color (bronze/silver/gold) in tag badge notifications
825
What are the badges I can earn on each site, and what are the exact criteria for earning each badge?
164
Add badges to Markdown?
187
Gold Sportsmanship badge
255
Increase close vote weight for gold tag badge holders
126
Empowering tag-badge holders part II - let's look at silver?
335
Gold tag-badge holders and moderators can now edit duplicate links