I am aware that this topic has been brought up on meta before but I think this is different because I am presenting a solution that makes the feature optional.

With over 60 sites sites on stackexchange, navigation between them is essential to their success. I think for most users the stackexchange dropdown button hot questions tab is how they will make their way to these sites on a regular basis but sometimes the site you had in mind hasn't a hot question for the day. I've tried going to another site which I remember exists through the all sites tab but it is simply too slow and tedious, its as fast to search for the site on google.

Provide an option to sort the "all sites" list on the stackexchange dropdown multi-collider into alphabetical order.

Inspired by MS Windows UI for sorting files in windows explorer, I propose something like: 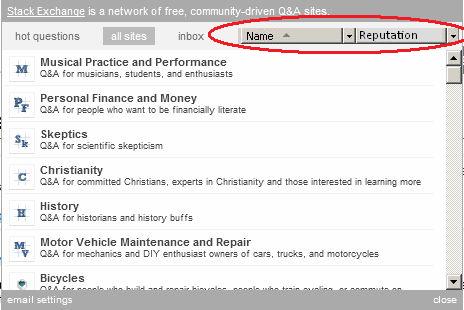 I've read that the current implementation sorts the sites according to the amount of rep you have on the site and that may be useful for some multi-talented people, but at the rate I gain rep I might have about 5 sites sorted by the year 2020 and I visit the site almost every day. I think we can still keep that option but the vast majority of users simply read posts that they find interesting or think of a question/topic and go to the site to see if someone has already asked about it. Going to that site that they have in mind would be made a lot easier if they knew the name of the site and could just swing the scroll bar down to the approximate relative position of the word's first letter in the alphabet.

It would also help if the list space for the scrolling was increased to fit more visible sites per scroll shift. Both changes would make finding that site you want on the order of O(1), constant time. Rather than the current worst case O(n) at the moment needed because you essentially must examine each element of the list until you find the one who want.

So as I said you can keep the option to sort sites by rep, but have another option to allow sorting by alphabetical order.

I like the way visual studio organises properties for a selected component giving the user options: 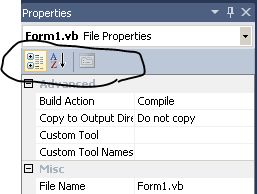 It could also be considered to have another option to present the list with sites grouped that are obviously related: e.g. Computing (stackoverflow, serverfault, superuser, programmers....etc), Science ( physics, maths, etc), Home & DIY ( Cooking, parenting, home improvement....etc.). For some reason the designers of stackexchange have yet to see common subjects and group them accordingly, that may be a question for another day...

1
Why not make it easier to find the sites list?

995
Show all of my question/answers to me even if they are deleted
12
Order of all sites in StackExchange menu
385
Send authors an inbox message if their question is closed
1254
Don't throw away all votes when a user is deleted
720
Dear Stack Exchange: a statement and a letter from your moderators
583
We're switching to CommonMark
248
Unpinning the accepted answer from the top of the list of answers
71
Revisiting changes to answer sorting menu: better use of space, moving menu into a dropdown, ascending/descending sort options, clearer descriptions