Possible Duplicate:
How does someone get to cast more than 40 votes in a day?

The daily vote limit appears to be subject to a race condition which could potentially defeat the limit. When I vote on a post, the system seems to count the vote against the post score before it counts against my vote limit, rather than acting as an atomic transaction, and this appears to be exploitable under a high-latency Internet connection (the network I was working from at the time randomly stalls for several seconds waiting for a response, possibly due to faulty on-site routing).

This is manifested as a substantial delay in getting the "you have x votes left today" warning: If I quickly cast more than x votes before this warning is displayed again, I can exceed the daily vote limit—a time-of-check-to-time-of-use bug. The result is the following (although I immediately retracted the extra vote): 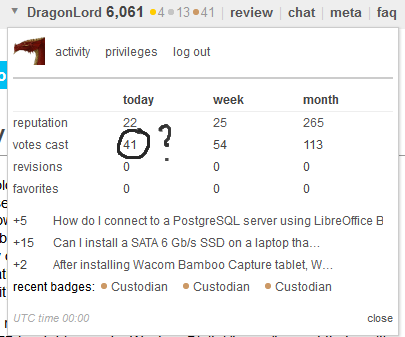 Can someone look into this?

Edit: Upon casting the final vote before the clock rolled over, I got "Daily vote limit reached; vote again in 36 seconds." I apparently got confused over the message, but there did seem to be some sort of anomaly with the way votes were being counted, as if the post score update and daily vote count update were not an atomic operation...

Another possibility is that it's the same phenomenon as How does someone get to cast more than 40 votes in a day?. That is, one of your votes was on a subsequently-deleted post.

Not the answer you're looking for? Browse other questions tagged bug voting voting-limits exploit .

61
How does someone get to cast more than 40 votes in a day?