Why no honeypot suggested edits?

While the review audits are great and much needed, as far as I can tell they do not apply for the suggested edits queue. Robo reviewers can still approve crap and smile all the way to their badges.

Is there a reason behind this? Constructing dummy suggested edits which are obviously bad shouldn't be too hard, and those who will approve them will get the nice warning message.

We've rolled out audit tasks for suggested edits in our more recent builds. What we're doing here is actually kind of fun. They're also sometimes hilarious. 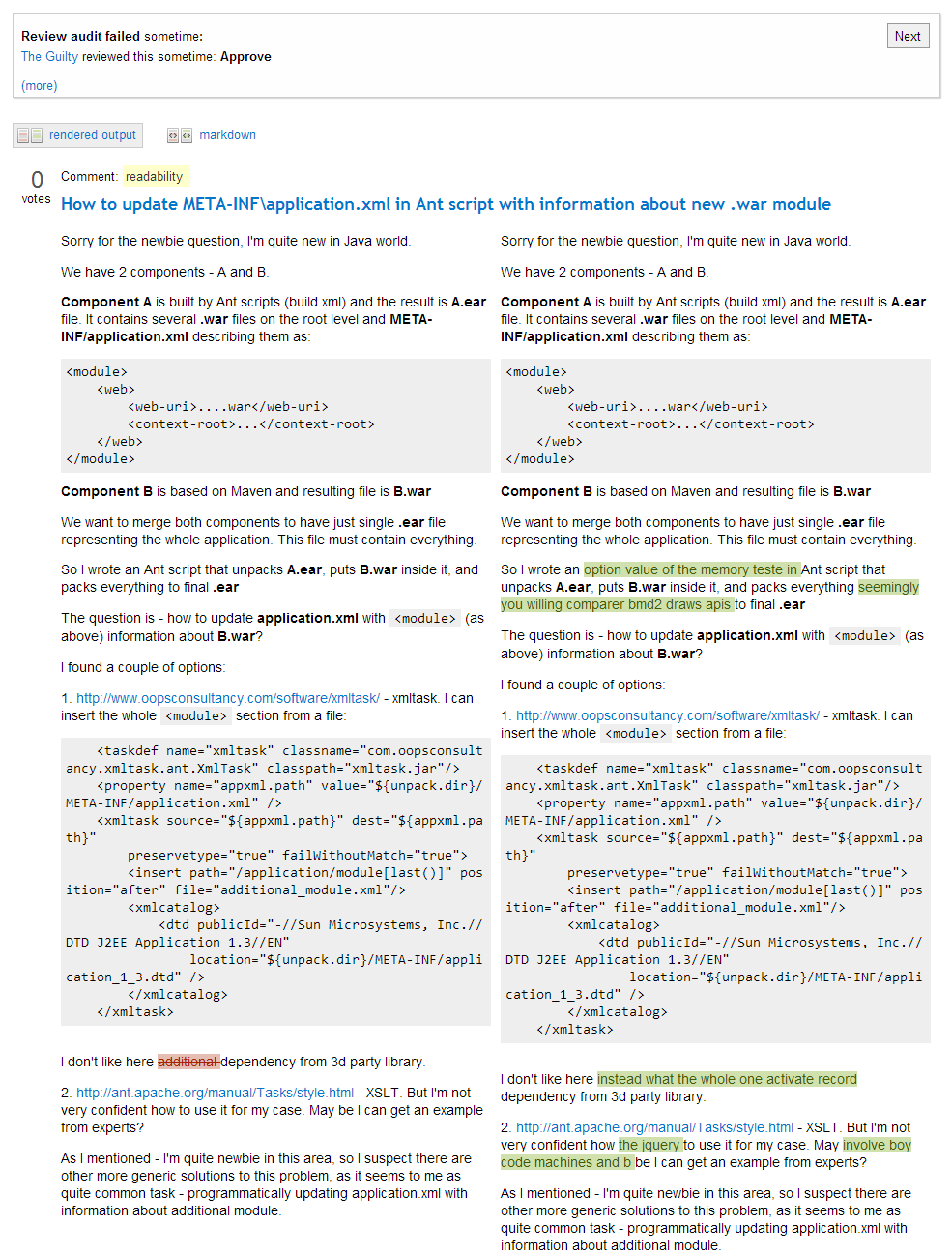 Since we know suggested edits have really noisy history, the approach we use for other queues (selecting "known good" or "known bad" content to then fake numbers on) won't really work. Instead, we're actually creating new, bad, suggested edits*.

We'll probably keep tweaking the algorithm, but based on a day or so of data it looks like it's convincing enough to catch really egregious reviewers.

*Not in a technical sense, these audits never get into the DB as suggested edits; but in a display sense.

**We're not doing anything fun with Markov Chains, just a random walk through the model to generate text.

I think it should be possible to add a suggest as honeypot button to all the items in all the queues. Maybe only to those with a certain rep, or certain number of helpful flags. I have come across any number of egregiously bad edits, which I've linked to before.

If you wanted to construct some, may I suggest:

I have seen all of these in the wild, and seen "This edit was already approved, please visit the post" when I tried to reject them.

The honeypot edits implemented by the Stack Overflow team are cool, but they have one weakness: as far as I can see, all honeypot edits presented to users are made by "new" user<number> accounts with 1 reputation (which is not that rare) and have never been reviewed before.

That way, somebody who writes an auto-approve bot will only have to wait until a suggested edit gets reviewed by others before approving it to make sure it is not a honeypot edit.

So, honeypot edits shouldn't just have fake "users" proposing them, but also fake users approving them in order to fool smarter bots.

TL;DR: Honeypot edits are great, but they could be made even better by including fake accepts.

If the team doesn't want to craft their own honeypots we could have a meta question where people put in their suggestions for the suggested edit queue; it'd be amusing and helpful!

To pick a random (shorter) question off my front page (and make it slightly worse):

when i try to

The honeypot suggested edit could be:

when I try to

Can we not just take suggested edits that were either universally accepted, or universally rejected and use them as the honeypot bait?

Yes, it might not be as obvious as the honeypot questions we're using in other review queues, but people should still be choosing the right answer.

Not the answer you're looking for? Browse other questions tagged discussion feature-request status-completed suggested-edits review-audits .

4
How are the words on review audits determined?
3
“Dummy” Suggested Edits
780
Recent feature changes to Stack Exchange
348
What are review tests (audits) and how do they work?
73
“Improve” treated as improper response to proper response to audit
92
Would anyone care for some processed meat-like substance with a gelatinous glaze?
80
Improving the Quality of Reviews: Project Honeypot
129
Bring a “human factor” into review audit composition/selection
10
Are review audit pass/fail decisions ever triggered by Skip?
41
Gaming the edit system with tiny edits?
See more linked questions

291
How do suggested edits work?
53
Tell us when the suggested edit queue is full/busy on Stack Overflow
530
The current review system encourages fake reviews; some people upvote everything rather than actually fixing problems
80
Improving the Quality of Reviews: Project Honeypot
27
Are the suggested edit audits too easy?
52
Change edit approval threshold to (# approve − # reject ≥ N)
54
Spam-polishing audits
295
How do we encourage edits to obsolete/out of date answers?