In the (default) Safari browser on an iPhone the "prev" and "next" characters in the links at the bottom of the questions page are rendered as Emojis, which looks quite ugly: 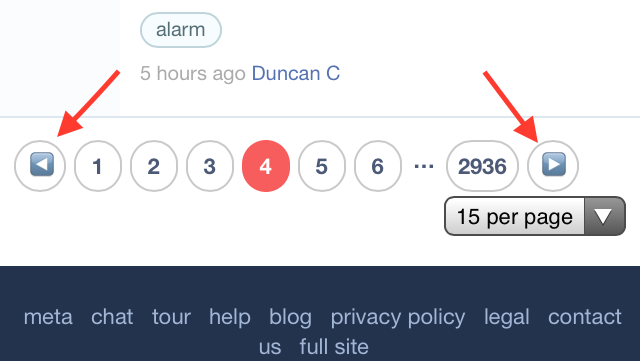 The HTML source contains the characters

On iOS devices, these characters are rendered as an "Emoji variant" and appear as a white triangle on a blue background.

This was already observed in Unicode characters being drawn differently in iOS5 and was (controversially) discussed in the Apple Developer Forums: How to disable emoji in a UILabel? (requires Developer login).

I observed this with iOS 8 on an iPhone, but as I understand it, the same happens on all iOS devices since iOS 5.

This is an iOS problem and not a Safari problem. It does not happen in the "mobile view" in Safari on OS X:

As noticed in an answer to Unicode characters being drawn differently in iOS5, one can append the Unicode "variation selector" U+FE0E (HTML: &#xFE0E;) to suppress this Emoji substitution.

EDIT: Motivated by the comments I'll make this a feature request now:

EDIT 2: The same problem was observed (and fixed) here: Why is the mod diamond red for question titles in the iOS app? ♦.

This is still a problem with iOS 14. I do not like the workarounds using the Unicode variation selector as I am referring to it in a Javascript method which flips between forward and downward arrows for a custom hide/show (which is why I want to fix it as the downward arrow is normal on the phone).

My hack/kludge is to use the Black Right-pointing Pointer instead. This has a similar appearance to the triangle:

[Screen grab from iPhoneXS under iOS 14.4]

Not the answer you're looking for? Browse other questions tagged discussion feature-request mobile-web mobile-safari .

14
Why is the mod diamond red for question titles in the iOS app? ♦

0
Migration dialog on non-mobile site is not rendered well in iOS Safari
5
Is there any dedicated Stack Exchange site for iOS devices and iOS applications?
18
Unicode phi characters inconsistent between body and preview and across platforms