If you do a **bold** with backticks around it, it shows the stars, but if you don't use them, you'll just get bold. And it's the same with most other styling punctuation marks.

However it does not work with `---strike---` in chat, and instead of getting it like it does here, I get this:

Though I wrote it with the backticks. And it gets stranger, if I edit the message it will sometimes become ---Strike--- rather than ---Strike---, and then work for most of the time (after it has stopped being green, before then it does the line through even if it's not meant to) until some seemingly random time when it stops working again. 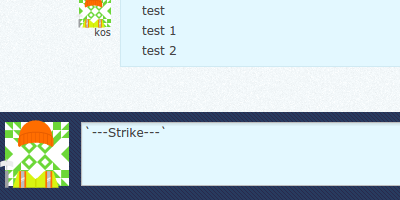 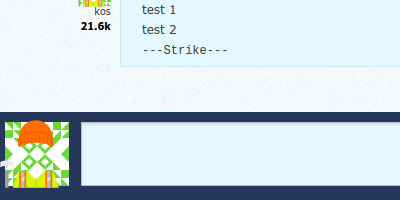 When you send `---Strike---` the message is temporarily shown as before updating and becoming ---Strike---; I suspect auchatstatus or some other userscript / Javascript related thing on your client interfering with this update.

6
Funny nesting of links and bold
107
Please provide moderators with better tools for moderating users in chat
53
Sensitive flagger data is exposed via chat WebSockets (and possibly /events), allowing "private" flags to be publicly visible
13
Mass-cancel stars in chat room
27
Chat flagging is out of control
324
Toward a philosophy of Chat
580
We're switching to CommonMark
749
New Feature: Table Support