Preface: I am posting this here as an adjunct to a post I just made on the meta site for “Science Fiction and Fantasy.” My post here will be far shorter and more “high level” since what I ask there is about a communication need and what I am asking here is for the proper tools to potentially sate such a communication need.

I—like many others—discovered Stack Exchange via Stack Overflow and realize that is the main site and many of the tools available to all sites stem from them being “battle tested” on Stack Overflow. Utterly reasonable and pragmatic approach to feature integration.

That said, many of the small Stack Exchange sites simple use the tools available in ways that are counter-intuitive to anyone used to the way the main Stack Exchange sites work. For example, on the “Science Fiction and Fantasy” site, comments often have a much longer—and well respected—life than they have elsewhere across the Stack Exchange network. Expanding the comment management system functionality is truly a can of worms that I don’t believe anyone should touch with a gajillion foot pole. But I still think some way of conveying high-level usage/site-culture differences like this is necessary to the overall health of the community.

That said it would be nice for casual users—such as me—to have one canonical page/guide/welcome that states something along the lines of:

Welcome to this site! While you might be familiar with Stack Overflow, this site works like other Stack Exchange sites but with a few differences we find work best for our culture.

Link some icon or menu thing on the top of each page to that page and… Done! A quick way to understand why a site might be different from core Stack Exchange sites.

Now I am using “Science Fiction and Fantasy” as my example here but I can easily see this being useful for some of the other, smaller, more focused Stack Exchange sites.

To my mind, the overall user experience is visually and functionally so similar across all of the sites that when differences appear in basic tool usage, it leads to confusion and potential conflict. Instead of relying on the community to constantly letting users know about “unwritten rules” of usage, why not just be transparent and clear about these differences from the beginning with some very clear and site-moderator manageable tool that allows them to summarize these differences.

It seems that simple functionality like this would be a big plus to the smaller sites as well as the casual users who just want to participate lightly without finding out that “ZOMG! I don’t believe you said/did since we are not like Stack Overflow so don’t think this thing is treated this way!”

I believe being very clear about these differences will lead to better content from casual users which benefits everyone in the long run. If the barrier of entry to a smaller community is risking stepping on tripwires casual user’s don’t know exist, it will simply alienate them from even casual interaction.

NOTE/UPDATE: I have discovered—for example of one site—the “tour” page for the “Science Fiction and Fantasy” site thanks to a comment, but honestly this is not obvious, you have to hunt for it and I dare anyone to look at the “tour” content for “Science Fiction and Fantasy” and find anything past superficial, bureaucratic “glad handing.” A page like that with the wording it has and it’s non-prominent placement comes off as some kind of a disposable afterthought; reminds me of a pamphlet that comes with a set of headphones that gets discarded after you open the package. I doubt most users ever see or read that “tour” content. Perhaps the “tour” page simply needs to be made more prominent and clearly address some deeper site-specific differences? Like I said, I embrace the idea there are differences. But they really need to be made clearer and at a high level in many cases.

This site is all about getting answers. It's not a discussion forum. There's no chit-chat. 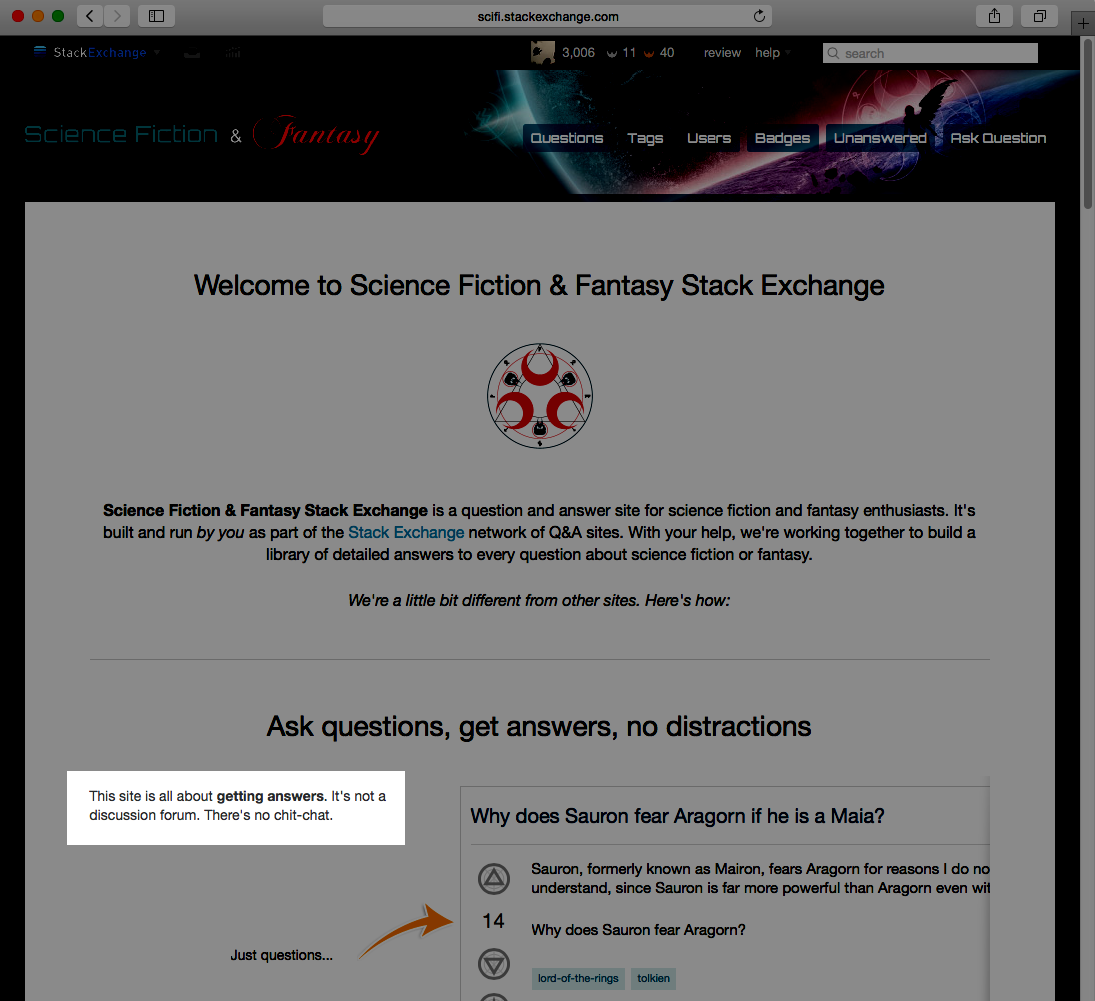 The system seems to be intentionally designed to let visitors at smaller sites drop anything into question / answer text box, without even hinting them that there are Tour and Help Center pages.

I accidentally discovered this at other smaller site and it was explained as follows:

On the smaller sites... since they get less traffic than Stack Overflow, there's not as much of a disincentive to prevent people from posting, since the community can help users fix problems with their posts, or close, flag, and delete...

This seems to be a really old policy. Back then, when it was established, common belief seemed to be that these matters will fix themselves after site grows, and it was assumed that every site will eventually grow (“Science Fiction and Fantasy” getting 8,000 questions a day like Stack Overflow, can you imagine).

Of smaller sites, only Server Fault managed to get "an interstitial page" to help newcomers - possibly because they complained loud enough about missing such a guidance.

Here's what I do when I want to learn about a community's culture:

Right there, you have five different places to go to learn about a site. I've explored and joined 30 sites across the network - including Science Fiction & Fantasy - and this strategy has yet to fail me.

Addressing the specific point about the tour:

There are no functional and usages differences between Stack Exchange sites. The great part is that the functional equivalence between all sites makes the transition from one community driven and moderated site to another much easier, once you discovered these and have the need or urgency to do so.

It really doesn't matter how much more text and guidance you put in front of people to make them aware of how one community is different from the other. Users that are used to one of the many forums are trained to ignore everything because they have one goal, get their own question answered. They do get extra guidance before they can post a question. That is happily ignored, I assume everywhere, not only on Stack Overflow.

I don't know how many users re-visit the tour or the help center if they switch between communities but their posts will still go through the same moderation functionality as on any other site. So there is enough in place already to direct users into the correct direction.

Rules for a community are by definition fluid. They change over time. Have a look at the early crap broad/resource request questions at Stack Overflow. So to have something extras like you propose would need updating and adaption at a regular basis.

What is needed is a healthy community with enough members that are up to the task to moderate their community and have a healthy discussion about the site goal and evolution on the site meta. That will distill a common denominator that can server as initial guidance, either in the help center or in the tour.

I don't think sites need something extra because I don't understand which usergroup you want to address. There doesn't seem to be a lot of cross-over and those that do should pick-up quickly.

I do think (new) users might need less complicated texts but above all sites need members that are willing to invest a little bit more (reading) time in a community to serve others instead of their own needs. New users that are not open for information about the site culture, on-topic-ness, habits and moderation are maybe better directed to other, less moderated, sites like Reddit and Quora.

Instead of relying on the community to constantly letting users know about “unwritten rules” of usage, why not just be transparent and clear about these differences from the beginning with some very clear and site-moderator manageable tool that allows them to summarize these differences.

Because... we don't know what they are.

It's not like each site got out the Stack Exchange rulebook and started adding rules and crossing out ones they didn't like. Culture is usually very informal. It is also always in flux.

Equally importantly, different people have different ideas about what the culture of a site actually is. Some people may not agree with what other people think the cultural norms are. Maybe some users on SF&F want comments to be less "permanent" than others do. Even moderators on Stack Overflow disagree sometimes about what is good and what is not.

So who gets to decide what the codified cultural rules for a site are? Should there be some formal referendum processes? Is it just moderators deciding for themselves and presenting a document?

Either way, this sounds disturbingly like culture police. Majority rules, insofar as culture usually works. But I'd hate to see the majority's culture becoming a fixed document who's very presence wards off users who don't agree with various cultural norms.

And giving such power to moderators is basically electing them as the culture police. Yes, on some level, the moderators of a site help create and enforce particular standards. But at the same time, it's all very informal, and therefore subject to change without having some formal process.

Codifying something nebulous like site culture into some list of rules is just not a good idea. It's too rigid and inflexible.

408
Graduation, site closure, and a clearer outlook on the health of SE sites
158
Our words are too complicated. Let's make them simpler!
15
Whats the most isolated SE site?

989
Show all of my question/answers to me even if they are deleted
1475
Fastest Gun in the West Problem
1831
Could we please be a bit nicer to new users?
1240
Don't throw away all votes when a user is deleted
409
Which computer science / programming Stack Exchange sites do I post on?
2784
A Terms of Service update restricting companies that scrape your profile information without your permission
2481
Firing mods and forced relicensing: is Stack Exchange still interested in cooperating with the community?
2217
Stack Overflow is doing me ongoing harm; it's time to fix it!
1558
Thank you, Shog9
572
Change in roles for Jon Ericson (leaving SE)