Which per-site-metas are offered in the chat-room creation dialogue? [duplicate]

Ask Question
Asked 5 years ago
Active 4 years, 11 months ago
Viewed 231 times
11
This question already has an answer here:
Why can only some child meta sites host chat rooms? Is there any way to bypass this restriction? (1 answer)
Closed 2 years ago.

So I wanted to test whether it is possible to create a new room associated to a meta site. To my surprise, this was possible only for some sites. For example, if I start to type "math", several metas are offered. When I start to type "history", I am only offered main sites. See the screenshots below. (Or you can test this for yourself in the dialogue for creating new rooms.)

This experiment suggests that only the meta sites, for which at least one room already exists, are offered. I have listed metas which had a chatroom here (at the time of posting that question).

In a comment another explanation was suggested, namely that meta sites are not offered for beta sites. For this reason I have included a third screenshot showing that - at the moment - meta is offered in this dialogue neither for Information Security nor for Seasoned Advice. (However, for Server Fault both meta and main are in the list.) So the distinction between beta sites and graduated sites is not sufficient to explain this.

Why only some metas are offered in this dialogue as possible room parents? Is it on purpose?

I do not think it is a big deal. But I can imagine a situation where associating room with meta might be useful. For example, imagine that community around some SE site wants to have two separate rooms: A "main chat room" for general discussion about the subject of this site and a "meta chat room" for various "janitorial" tasks (like closing, reopening, retagging, editing, flagging and advice related to this - which is somewhat separate from the the subject of the site, more closely related to maintenance and moderating of the site). It is my understanding that at least one room associated with a site, be it a main site or meta, is kept alive, even if there was no activity for 14 days. (And this comment by Marc Gravel seems to confirm this.) So the advantage of this arrangement would be that the "janitorial" room would not be frozen even if there were some periods of inactivity. (Assuming it is the only room associated with that particular meta site.)

Perhaps you can think of some other scenarios when having meta as a parent room might be useful. However, this is not that important for my main question - I am simply asking why the dialogue for room creation behaves in the way described above and whether it is status-bydesign.

Here are the screenshots: 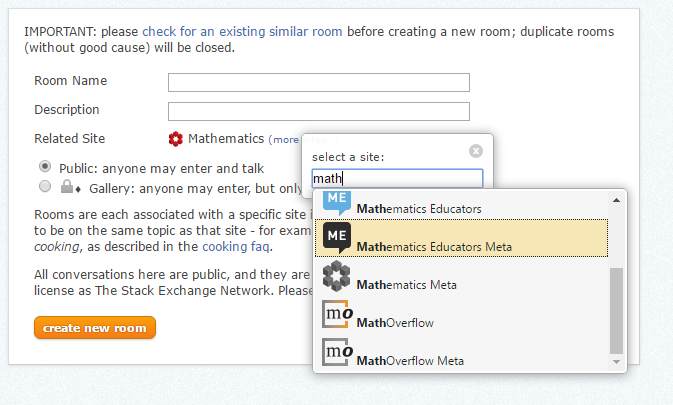 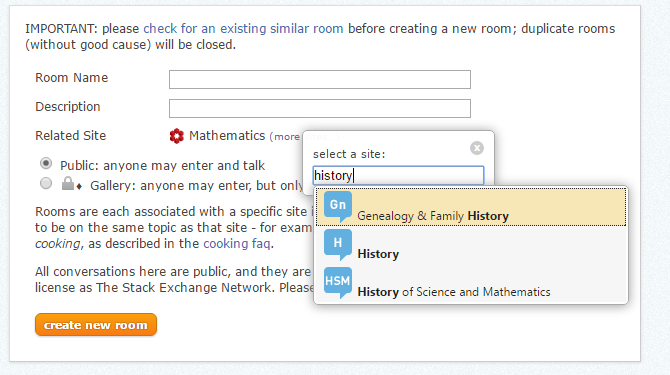 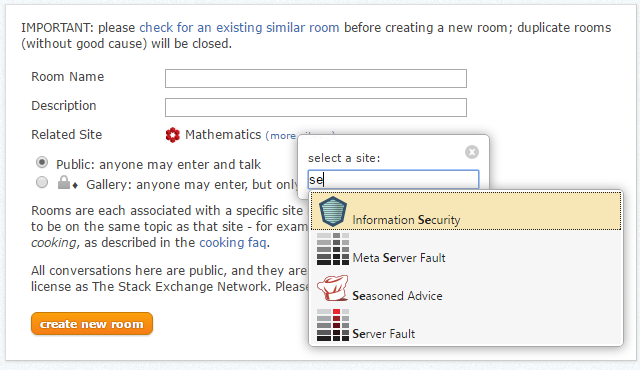 EDIT: Very recently the only room associated with Meta Mathoverflow has been frozen and deleted by a moderator. It seems that this changed the list of rooms offered in this dialogue - Meta Mathoverflow is not offered there anymore. (You can notice that in the screenshot which I took less than an hour ago, Meta Mathoverflow was one of the possibilities.) 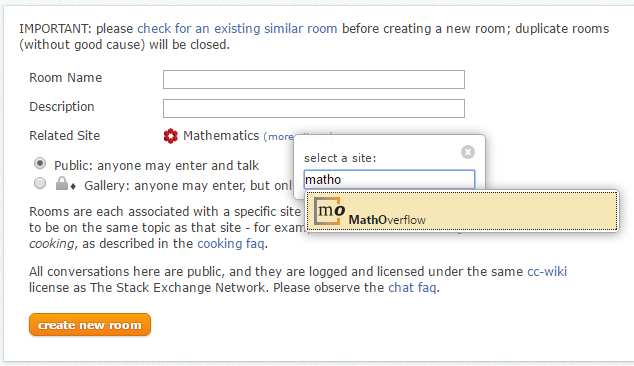 11
Why can only some child meta sites host chat rooms? Is there any way to bypass this restriction?
9
Why can meta sites be parents of chatrooms?
7
Are rooms associated with per-site-metas shown when viewing a question?
7
Chat room creation missing a lot of sites

602
Formatting Sandbox
703
How do I get attention for one of my own questions without a good answer?
837
The Many Memes of Meta
800
What are the badges I can earn on each site, and what are the exact criteria for earning each badge?
162
Flags in chat are defective by design
7
Are rooms associated with per-site-metas shown when viewing a question?
323
Toward a philosophy of Chat
379
If you're gonna talk Politics, you must respect those who disagree
949
Firing Community Managers: Stack Exchange is not interested in cooperating with the community, is it?