Looking back at one of my previous questions here at meta I feel like I was hit by serial flag decliner (someone who makes a large number of questionable declines of flags in a row):

Wonder if this kind of issue can happen on Stack Overflow?

Recently discovered another example of large number of questionable declines of flags in a row. The issue was discussed and resolved at SU meta:

Per my reading, conclusion at SU Meta was that the issue was caused by misunderstanding and some miscommunication. As for the flags affected by the unfortunate series of declines, these were considered extreme circumstance and as such were removed by a dev modifying the database.

Generally, moderators are discouraged to decline flags without a strong reason.

Given that moderation is human activity involving judgement call, deviations from above guidelines are inevitable.

As for series of questionable declines - to start with, the risk of it to happen is always there when there is a series of flags.

Flag decisions are often open to interpretation which implies a risk that flag will be dealt with by someone who disagrees or misinterprets the intent. This is especially the case with not-an-answer flags with their wildly rich set of suggestions: "should possibly be an edit, a comment, another question, or deleted altogether" (should... what?).

Discussing things at meta prior to flagging lowers the risk but does not eliminate it completely because there is a chance that flag will be handled by moderator who is not aware about particular discussion.

The only way to guarantee that there will be no serial decline is, well, not to flag in series at all.

There is also a low-risk option when flagging series of Q/A that were already discussed and agreed at meta. For these, one can use "Other" flag with comment like "flagging for removal as agreed at meta discussion: <URL to meta discussion>". This leaves pretty little room for flag to be misinterpreted, no matter who will handle it at moderator side of flagging queue. 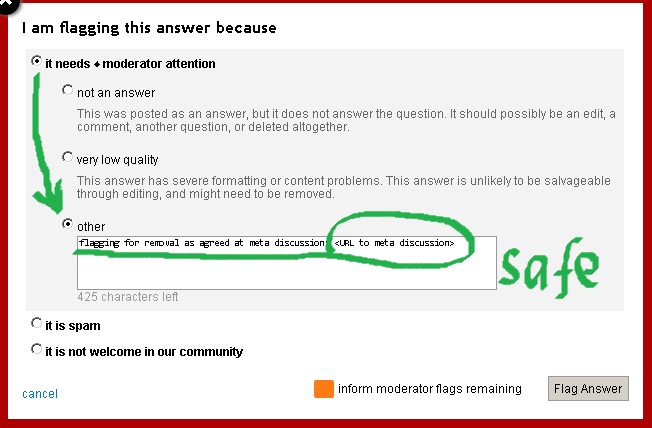 In flag comments, a reference to particular moderator who "blessed" this series of flags wouldn't hurt, either: "...as agreed with moderator <name> at meta discussion: <URL to meta discussion>"

Not the answer you're looking for? Browse other questions tagged discussion flags declined-flags .

161
Allow recovery from flag hellban
176
Who are the diamond moderators, and what is their role?
32
Should the not-an-answer flag description be clarified?
15
Is it forbidden to use “Other” flag for link-only answers?
13
Was it a mistake to flag these answers?
8
My “not an answer” flag is gone and not showing in my history
5
Why don't delete votes expire?

385
What is a disputed flag?
95
Allow moderators to reverse and/or nullify flag decisions
412
Can a machine be taught to flag spam automatically?
352
Let's take a look at the interaction between staff and the “power users” of the network
2142
Stack Overflow is doing me ongoing harm; it's time to fix it!