What is the point of the “Parent User” in Chat?

I've looked at the Chat FAQ and I'm still not sure what the point of having a "parent user" of the chat account is.

Why can't a Chat account be associated with multiple other Stack Exchange accounts in the normal way?

To be honest, much of the "parent user" idea is still a leftover of the original plan to let each Stack Exchange site have its own chat site. You can see this in http://chat.meta.stackexchange.com and http://chat.stackoverflow.com/ – having a "parent user" here obviously makes sense.

At some point, we decided that not every single SE site needs its own chat site; it's much nicer for the community to gather on http://chat.stackexchange.com. This was also in the very early days of expanding the Stack Exchange network via the Area 51 process. The very first SE 2.0 site (Web Applications) was launched around the same time as chat.

Our handling of cross-site accounts back then was quite limited, as you see from the amount of issue reports regarding account association from that time. To explain it in simple terms, back in those days the master "unit" was a user account on a specific site; from there on, you could follow the trails to accounts on other sites that were associated with it.

This handling makes sense considering how the network evolved from one to three or four sites, but once we began having dozens of sites, that didn't really scale anymore. Lots of work in the second half of last year was spent on a project (codenamed "Costanza Wallet") to correct this, and turn the philosophy around: now, the master "unit" is a network account, and it can have one to many site accounts.

Chat is still very much in the old mode, in which having a single site account to be the master user was pretty much the only way. We have made gradual improvements in this area, but it's still far from done. I don't know if we're ever going to totally get rid of the idea of a user's "main site", since most people have such a site that they consider to be the most important (if not only) site they're active on, but over time, this idea should disappear into the background more and more.

The parent user in chat is the user that decide some of the privileges users have in chat; for example, it is the account that decides when a user on chat is a moderator. 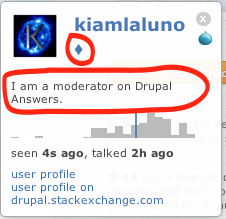 I guess they use just an account because, differently, the code should verify if the user is a moderator in any of the sites where the user has an account.

Not the answer you're looking for? Browse other questions tagged support chat user-accounts linked-accounts .

67
My account has been temporarily suspended; what does that mean?
21
Can the chat interface also offer us the user's profile from the chat room's site?
10
Why chat profile in some rooms does not have a parent SE profile?
2
How come the Meta chat rooms are separate?
4
Permanently kicked myself out of chat room by changing chat parent user
6
What should happen to a chat account after the parent account was deleted?
6
Let's have better idea on how to get rid of the point of parent user in chat
3
When I type “chat.stackexchange.com” into my browser, why do I get a Blender-specific window?
8
Show the avatar of related site of a chat-room instead of parent site of a user
11
Link to generic stackexchange.com profile from chat.stackexchange
See more linked questions

260
How can I delete my account?
686
How do I get attention for one of my own questions without a good answer?
561
How does the bounty system work?
813
The Many Memes of Meta
773
What are the badges I can earn on each site, and what are the exact criteria for earning each badge?
573
What is serial voting and how does it affect me?
410
A site (or scraper) is copying content from Stack Exchange. What should I do?
323
Toward a philosophy of Chat
2365
Firing mods and forced relicensing: is Stack Exchange still interested in cooperating with the community?