The leading for lists is too wide and/or is not adjustable on SE 2.0 sites

On Stack Overflow (and Meta.SO), the standard leading used with bulleted lists has minimal vertical space between each line. If you want to increase the leading, you can insert a space between the first and second items in the list, which instructs Markdown to wrap things in a <p> tag.

This has apparently been disrupted on many (all?) of the SE 2.0 sites.† The standard leading is much too wide, and there is no change when you insert a space between list items. Despite this, the editing help still says the same thing as Stack Overflow.

Compare the following two screenshots—SO is first, then one of the SE 2.0 sites:
(The screenshots show bulleted lists, but this applies equally to numbered lists.) 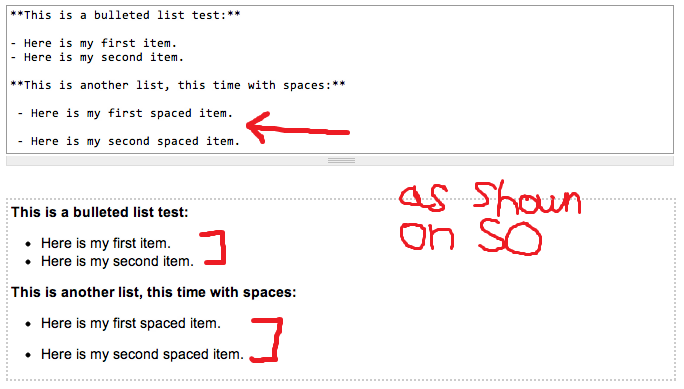 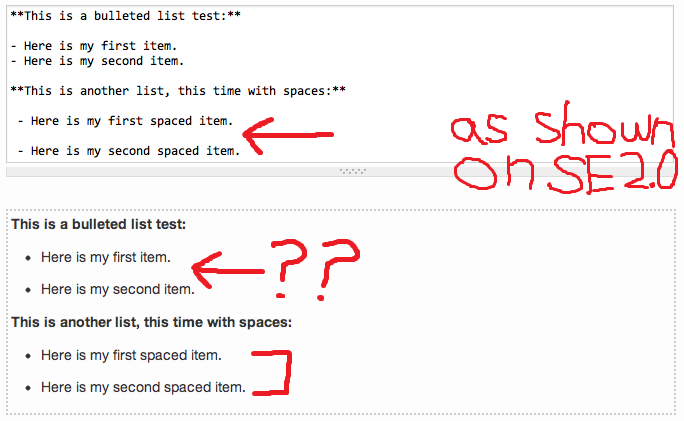 I suppose this might not be considered a bug, but rather by design, with theory going something like "more leading makes things easier to read, and the non-tech savvy audience of the SE 2.0 sites won't necessarily know to insert a space between their list items". The problem with this approach is two-fold:

† At first, I thought it was connected to the new Grainy theme, but it seems to also be the case on sites like Skeptics, which use their own custom theme.

10
Easy navigation between StackExchange-2.0 websites
16
Why does Stack Overflow use HTML divs instead of lists for the question list?
256
Let’s improve our site navigation